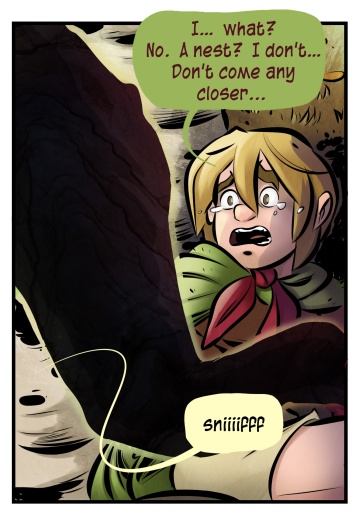 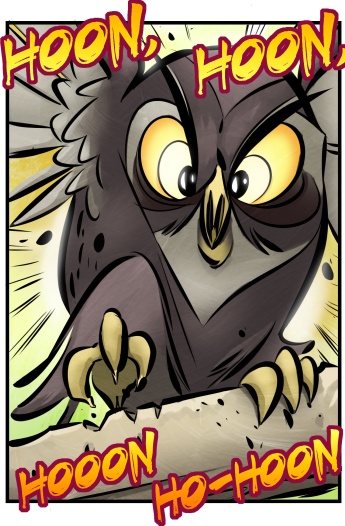 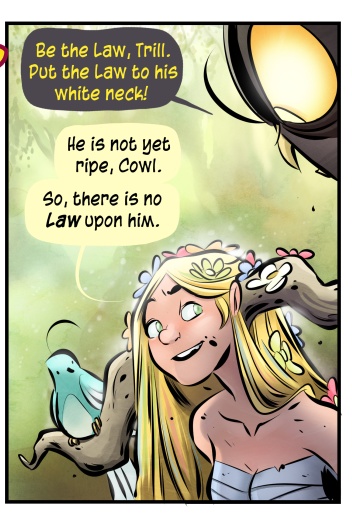 Part Two of The Judging Wood is now available for your perusal. One of the interesting things about having worked with Steve Hamaker as opposed to handling the colors in-house like normal is that his choices would not have been our choices. If we pull somebody in, though, we actually want to collaborate with them; it's not a straight up work for hire thing. I'm fairly certain the Owl here wouldn't have had dark feathers - I believe Grib was thinking of a snowy owl - and blonde hair with wildflower streaks weren't in the cards, either. We tend to use a more grim palette in general. This is a cool way to think of the Eyrewood.

Something else you might be interested to know is… I mean, I have seen all the inks for this series. If you look at the first strip, a reasonable, non-artist person like myself would assume that some element of those background details would be in the actual linework, but I would be wrong. Only foreground stuff is rendered in the versions he sent along to Steve. A pro colorist's role is far broader than I would have called it: all the trees and light in the background are his. I would think that such overlaps in purpose would contravene the 1977 Artist Accords or something, but no.

I was pretty cranked up when PAX wrapped, and I could make a strong case that I am still cranked the next morning. I am, at the very least, firmly mid-crank. We did Acquisitions Incorporated in the afternoon, and that started some kind of chemical process going that I couldn't really tamp down. People seemed to enjoy it. I basically black out when I'm on stage, whether its a Q&A, or D&D, or whatever it is. I don't really have linear consciousness up there, it's just "flow." People always ask us what is going to happen in the next game, but we don't actually know - Chris Perkins, "DM To The Stars," never tells us. People also seem to think that it's scripted, or might be, but I swear it isn't. I wouldn't even be able to maintain a script in that state. Thanks again to Patrick Rothfuss, who delivered another great turn as Viari.

TrickBuffer and ComicSeans, champions of this year's Omegathon, did - in collaboration with their opponents - deliver a rousing comeback tale in the final round of the competition. If you have never even heard of Pac-Man Battle Royale, I wouldn't be surprised. Even at a gaming convention, most people had never seen it before. It's essentially Pac-Man Deathmatch. This venerable yellow sphere is rife with genius reworkings alongside the more conventional remakes - Pac-Man Championship Edition DX must be considered one of the finest games of all time, and Pac-Man Vs. is also a videogame.

I've played Pac-Man Battle Royale a lot. If it's there, it's hard not to. It's totally amazing. I've never seen some of the interactions our competitors were using, though. When I say Deathmatch, I mean that you eat other players like you would Ghosts after consuming a power pellet. But there are ghosts in the level also, who constitute a kind of aggressive terrain. But when Pac-Men (mans?) connect with each other, they bounce. It's a big bounce. You basically lose control of your character. And they were using it in aggressive ways, or defensive ways. Super risky ways. They delivered a hell of a show.

Backstage, after we had congratulated their foes VideoGamr101 and Jordman12, Robert asked them how they were able to come back. There was a point where ComicSeans had looked over to TrickBuffer and told her something, and after this point they were able to melt away the deficit and come from behind. What you have to understand is that, at PAX East, you get matched up with somebody and that's your person as an Omeganaut. It's all co-op, all the time. They were here this year as the runners-up from last year's stage, and - in a magnification of every fantasy I have ever had about this show - they became good friends. After their loss last time around, they'd been hanging out and practicing all the time. To hear Chief Omegatech Travis Eriksen tell it, they bored directly through competitors' ribcages at virtually every threshold of the event.

What he told her between rounds, when the data did not look good and projections were dire, was "I believe in you. It's not over yet." And when I heard that I was like, you know, maybe things are gonna be alright. 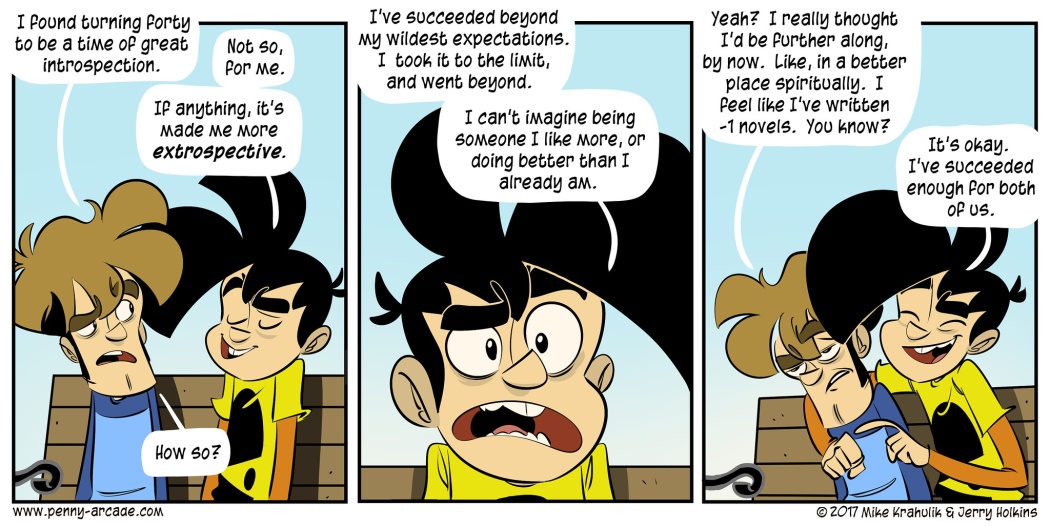