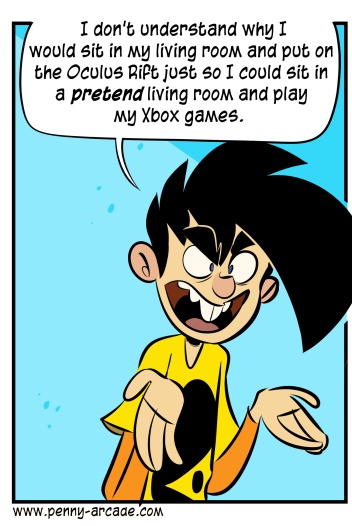 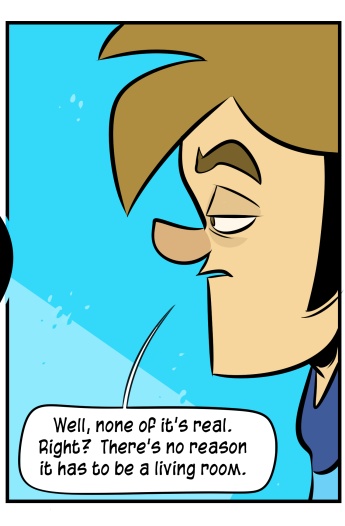 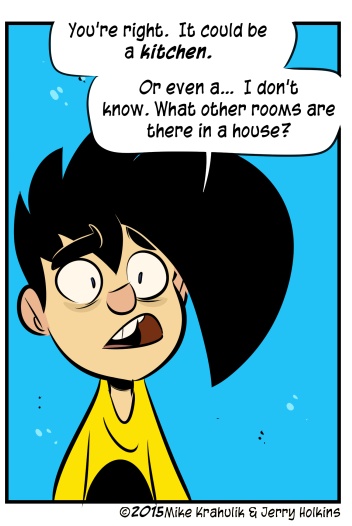 It turns out that running a press conference for a virtual reality thing is very hard when you can't actually communicate what makes it special in a normal video. It's similar to a few E3s ago, when the Playstation 3 was poised to herald an era of 3D. I can't remember: did that end up happening? It seems like it didn't end up happening. But the problem was the same: it would be like trying to tell someone about what it's like to be drunk, and then showing pictures of drunk people. It's incoherent.

I knew they were in trouble when they kept showing pictures of the same dinosaur from different angles, and saying, "Fucking imagine how scary this dinosaur would be if it were real. If it were a real dinosaur, right, and you were there. It's just you and this giant dinosaur, and you're like, fuckin', get out of here man!!!" It don't work, fellas. I understand that you have to do stuff like this, even if it doesn't work. I feel bad for you. Not ironically, but for real. It sucks.

Still interesting though, and still worth watching.

So the Oculus Rift is, itself, the Xbox answer to Project Morpheus. I had heard that, of course; most likely, every person trudging the Earth had by that point. And since Microsoft rumors are always true, I had ultimate confidence in the assertion. I don't think they see the value in their own version of that tech, they just want to be the place you plug all these things into. There's a case for virtual living rooms, I've seen some compelling demos of same, but can they stream functional, doesn't-make-you-sick VR over that? Or is it just the feed, populating some grey cyber-rectangle? Because that's not gonna get me off the couch. Especially when the Rift is already plugged into my computer. I've got games on there. And my videocard howls like a blood-mad wolf. It's not clear to me what the breadth of this usage case is. It seems like Microsoft wants to augment reality, a la Hololens, which is an either/or proposition. Unless there's a model of the Oculus Rift that is larger, and can be worn over the Hololens. Obviously, I'm down. My neck is crazy strong. I can carry the load.

I've spent a lot of time in earlier versions of this headset, so I was already a believer, even before anything akin to best practices were in place for hardware or content. That's why I can see a "presser" like the Impossible Presser they were forced to commit to and still get it. It's really about ideas at this point, and until I can use this new stuff I can only compare the previous experiences I've had with competing product.

We ran through a demo of Valve's and HTC's "Vive" thingimabob on Monday, and I don't think it would be possible to emerge blinkinly from their curated virtual scenarios without the impression that you lived in a different world from the one you inhabited before donning the headset. Their technology is cool, in that it works, but the ideas are where we're at now and they are huge: instead of an operable zone in front of the computer, their philosophy (and it is a specific, potent, coherent philosophy) is that VR is a place you stand and walk around in. One of the more compelling experiences in the Oculus DK2 is the straight-up test app, it's just a desk, but you can peer and look and stand and sit and the "presence" you get is incredible. Well, every demo I had on the Vive was that and better. Custom hardware "lighthouses" describe a virtual playpen type space where the simulation takes place, and when you get close to the edges of that space, you're informed gently that you're nearing that edge. It lets you relax in there, which is one of the harder things to do. Couple this firmly delineated, functionally traversable space with "performant" content and practices designed to minimize disorientation and vomiting and you start to get the impression as a consumer that we've got a ballgame on our hands.

I would have to use the new Oculus stuff to know how it compares, and what it enables. I think they get to a lot of the same places. I was initially worried that with three players in the space, it would be kind of a mess, but I think I might have been wrong. I think that what's happened is that we've reached the teen years of the technology very fast, and we actually need these beasts to snarl and war with each other if we're going to find the path.