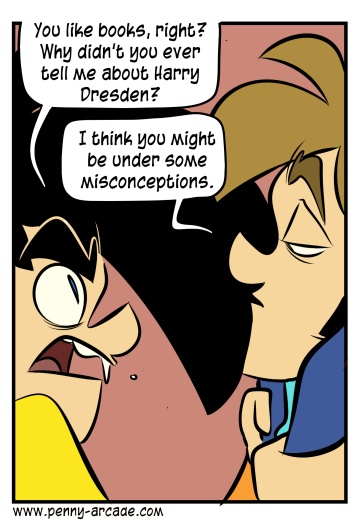 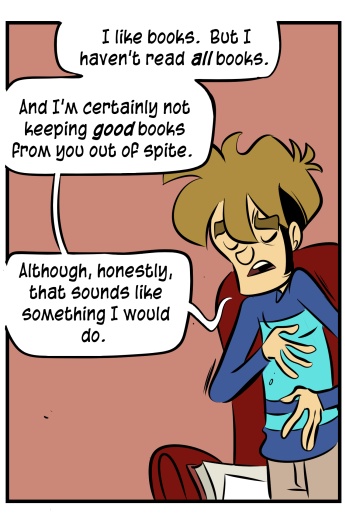 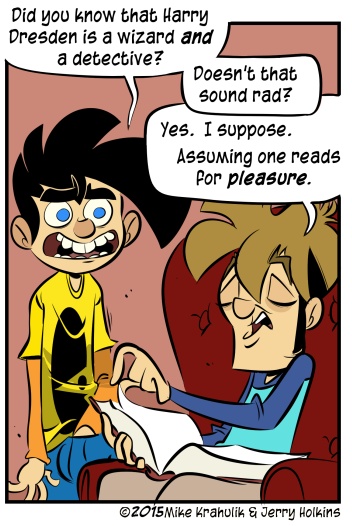 He's been feasting on this Dresden Files shit over here; heaps of Dresden Files books are arrayed about him at the five points of the pentacle, where he sits within a circle of what I'm pretty sure is Lik-M-Aid.

It's to the point where when he nears the end of a Harry Dresden Book, he's ordering the next three so that he can maintain forward momentum without running aground. It's doing some noir thing that has a kind of preternatural grip on him; I feel like exposure to these materials have made him increasingly hard-bitten. My fear is that he might be out much later than normal, trying to frame himself perfectly in the nimbus of a streetlight. I'll tell you what's going to happen when he's done with these, straight up: he's going to end up in the arms of Stephen Brust, with his take on fantasy noir that Gabe was too good for last time. You know what's funny? I named that Stephen Brust comic the same thing I named today's. COINCIDENCE? Yes, actually.

BUT, IS IT ACTUALLY? Also yes.

Hey! There's an ever shortening span of time between now and the Fifth Annual Child's Play Invitational Golf Tournament on July 17th, and since registration closes in two weeks the Hour of the Club is upon us.

You've got three options if you're planning to support Child's Play in this way. You may be asking yourself, but, what are these ways?! I got you.

1. Regular Entries, with or without rental clubs, which includes the Barbecue and Awards Ceremony afterward are $175 and can be purchased here.

2. Mini-Golf Entries, which include the Barbecue and Awards Ceremony in addition to a Spectator Pass are $60 and can be purchased here.

3. The Spectator Pass, which includes the BBQ/Awards Ceremony and the Spectator Area with games, raffles, and other entertainments for the afternoon is $40 and can be purchased here.

There are a few company foursomes out there, and if you'd like to set up something like that for your crew or coordinate a company payment, you can work out logistics stuff by mailing Erick Blandin at eblandin@childsplaycharity.org.