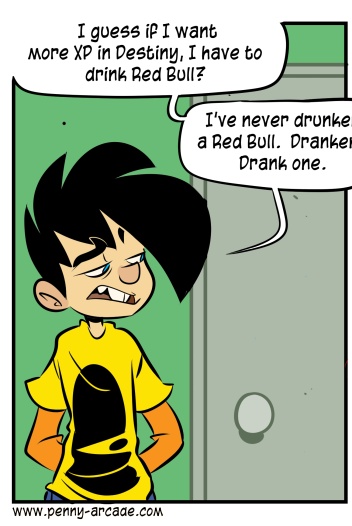 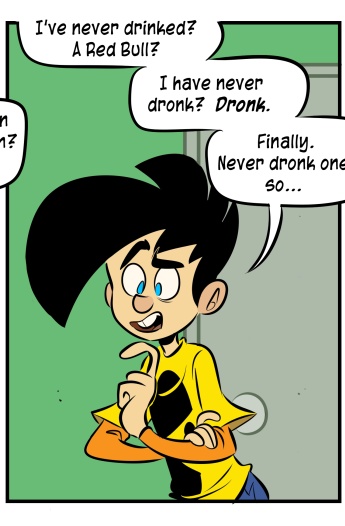 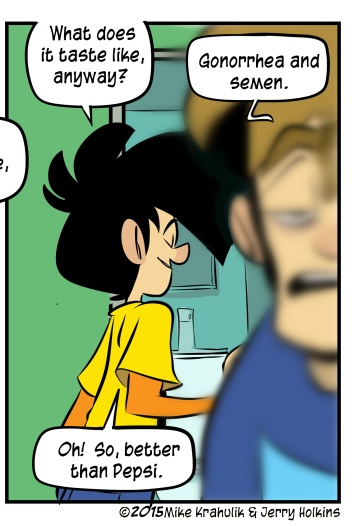 He legitimately wanted to know what that shit tastes like. Not good, I would say. Not potable in the classic sense. Tangy in absolutely the wrong way. You can also get XP in Destiny by, like, doing bounties and stuff. No fluids are required. #Lifehax

The last time I "used" it - and "used" seems like the correct term, the way you might "use" meth - it was to retain some semblance of humanity during Strip Search. My memory of the filming process is like an archipelago, with these blobs of awareness floating very near to one another but never touching, never fashioning a true linear causality, and I don't know how I did it the first time let alone if I could ever do it again. The credits should say Red Bull anytime they currently say Jerry Holkins.

It's inextricable from gaming actually, this industrial solvent, and not merely because it is leveraged to extend consciousness and produce visions in a LAN context.

We played what I would describe as "all of the" Wipeout XL. When my cohort and I first moved in together, it was one of those things where we had to take the apartment before we could both get moved over, and so the house contained only essentials - which in our case were two sleeping bags, a small entertainment center, and a Playstation One of my favorite things is the fabrication, out of whole cloth, of brands for games. Rockstar must be considered the gold standard here. Actual brands have a cloying, mercenary odor when used in these simulated environments - at the same time, urban spaces don't parse as real if they aren't slathered with advertising.

Wipeout was decked, perhaps even stacked, with advertisements for an imaginary product called Red Bull that were so thoughtful and robust in their construction that I was completely hooked in. The name had that amazing, vague, anything, nothing quality that I think represents the true horror of dystopia. But it was real, it just wasn't real here. Imagine my surprise when I started to see advertising for this wholly unreal videogame product all over the fucking place. It would be like looking up at the sky and seeing the memory dump from a Blue Screen of Death.