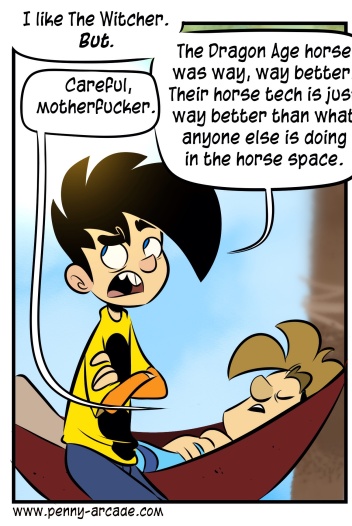 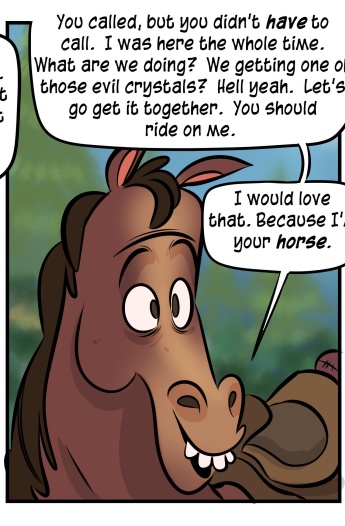 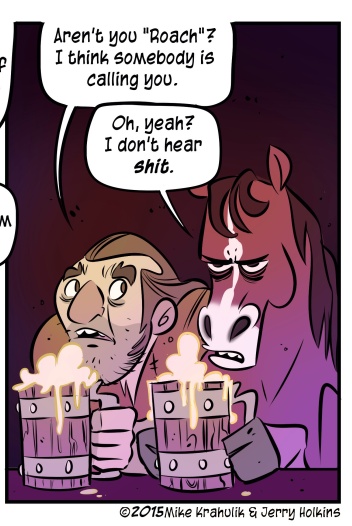 I spent the weekend in Spokane, which wise men call Ulk Shambol or "The Dream Grave." I usually get in trouble when I talk about the town my mom lives as though it is the sort of place Lord Sauron would amass his evil armies, which is, you know, an exaggeration for comic effect. In truth, I only felt his baleful, seeking eye once.

Many of the things that I've said about Spokane don't truly represent the town. The pustules? Imported! They aren't even native pustules. A lot of the stuff I've talked about were actually hallucinations, no doubt brought on by the hot lash of the accursed Vision Frond. Now, there's something that's actually from there. It's worth noting that these whippings were directly administered by Spokane's Hell Mayor, Satan.

I can't tell you how pleased I was to hear that our own Mr. Gribz had taken up The Witcher, and made a commitment to witch in earnest. On PS4, sure. But I don't look a gift "friend doing what I want him to" in the mouth, indeed, I've never investigated his mouth for any substantial period of time. He talked some shit about Roach, but… that's fair. It occurred to me as he was explaining it that I didn't think of Roach as a digital horse. I thought of him as a real horse that I had a real relationship with. Sometimes he pops up in, like, an inconvenient part of the bazaar. Sometimes he's hanging out with other horses who are friends of his or whatever and he's not where I need his horse ass to be. I cut him some slack because he's a really real horse and I'm always bossing him around.

I'll be curious to see if The Witcher is able to wear a groove in him the way Dragon Age did. DA has a ton of hyperfamiliar MMO stuff that he is already weak to. Them herbs, for example. The Witcher has some of that, too, but not at much - and they don't tie it all into an Ur-Currency.

What I want to know most - and it'll require him to be in there for awhile - is if he'll be able to sink into the emotional murk of these quests. He's an inveterate skipper of text. As much as I've tried to train him away from this gruesome practice, the fact of the matter is that games generally do not really incentivize people to listen to that stuff. The surprise here is that there is a ton of great work even in what would be - in any other game - complete padding, the narrative equivalent of packing material. If someone avoids eating styrofoam, maybe that's to their credit, even if I eat tons of styrofoam all the time on the off chance there might be a Rolo in there. I don't know. Maybe I'm the one with the problem.