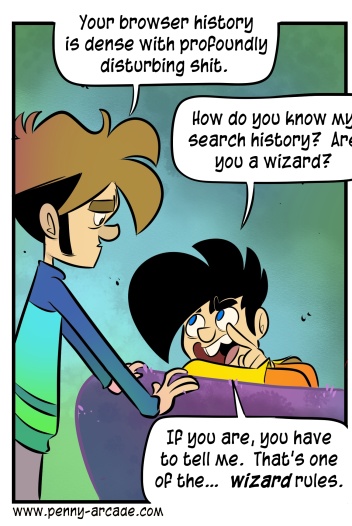 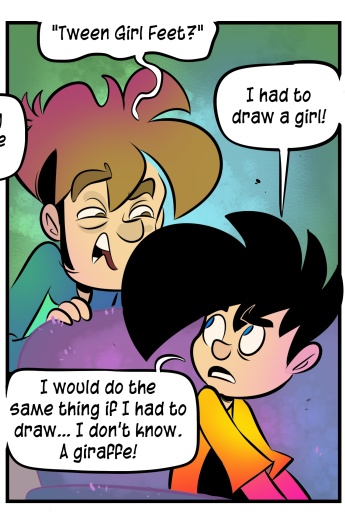 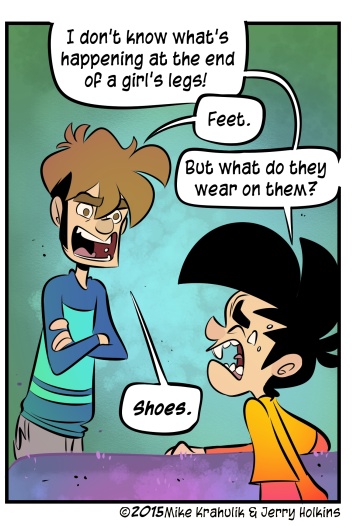 We're both gonna try to get out of town to varying degrees at the end of July, ahead of the Six Month World Tour that is PAX, and we've thought of various ways to manage that span - we'll be gone maybe six strips or so, which is how we have come to reckon time.

We've got a story we're gonna run then, a Nightlight story that gives some more information about how the setting functions, and it should be about that long if what we planned is correct. Doing research for the awesome new character at the center of it has probably fucked up his search history forever, though.

I've got an embarrassment of tween girls over at my house, the neighborhood is lousy with them. If he wants to know what's is going on with this prized demo I can tell him. In my experience, tween girls are always

- Making cell phones and laptops out of cardboard
- Writing or performing in bold original works
- Unlocking characters for me in Rayman Legends because it is too hard and I can't do it.

That's how the ones around here get down, but I'm certain that tracks globally.

I'm still walking around Novigrad in The Witcher, or some other fucking insane Witcher town, playing barkeeps over and over in Gwent until they get an irredeemably shitty hand and the AI just spins in place. The other thing I do is steal everybody's milk. I am the exact opposite of a milkman. Oh! The last thing I do is wonder why towns in other games feel like they were created automatically by a piece of middleware ("Cornerstone DX") and Witcher towns are actual real places somewhere that I am watching via a magic portal.

Every week they're giving me some new thing, some greaves or a pauldron or some shit, and I don't even see it because I'm drowning in shit to do. They should offer the Game of the Year Edition with all the DLC on a tombstone because it will last longer than the average human lifespan.

I don't think you're doing it wrong if you beat it already; I envy you. I wish that I'd been able to. I'm not doing it this way because I've discovered some gourmet methodology for game consumption: this is simply how much Witch I've been able to fit into my beak at once. By the time I'm done with this, really done, everyone else on Earth will be playing freemium AR MMOs on their cyber refrigerators.