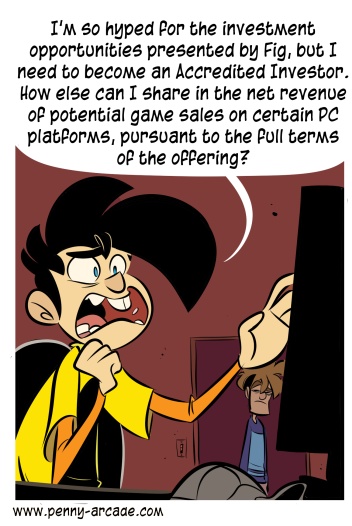 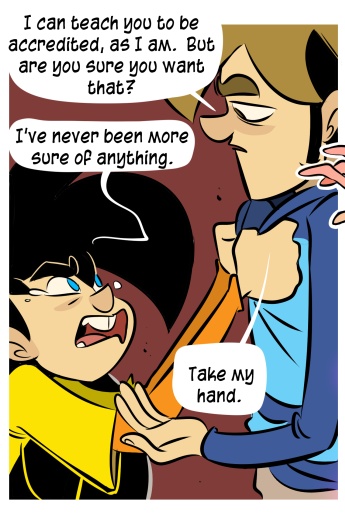 The top-line bit in any story about Fig - a Kickstart-alike from a gaggle of crowdfunding apex predators tired of paying Kickstarter's fees - is that there is a route here to get equity in the games produced. Eventually they'd like that to be broadly applicable, but for now, it turns out there are laws that govern this type of speculation. It requires that those who partake in the ritual be Accredited Investors, which means among other things that they have money to lose. It presents a scenario where you could lose your shirt funding a game where you play as a shirt in a world where shirts have been outlawed.

Becoming an Accredited Investor is no simple matter, and indeed, involves the renunciation of matter itself. The six "mouths" referred to previously may not be mouths at all but a sequence of six conduits one must traverse, devoured by a succession of increasingly sparse realities, until only intention remains. Then, and only then, can you fund a kinda 16-bit lookin' indie roguelike.

Over here we are set to the PAX channel and it is running 24 hours a day. I am fully terrified of it, I don't know entirely how two fundamentally monastic weirdos came to be the emcees of shit, and generally that would mean that I cocoon myself but I'm not gonna do that this time. I put myself in the panel mix just to get over it - Gabe and I are going to make a boardgame, live, alongside the crew from Lone Shark Games with zero preparation. There has to be a stress level beyond which the pressure no longer increases… right? I am determined to find it.

People always ask me what I think about all this stuff, and I tell them that I don't think about it. That is like feeding your arm into one of those things lawn and garden type people feed tree limbs into. It's a good way to convert your brain and skull into an aerosol. I have a new policy I will attempt to manifest this show: what if it was okay? What if this is what I'm supposed to do, as opposed to something that happened to me? Let's try it this way, just once, and see if I catch on fire.