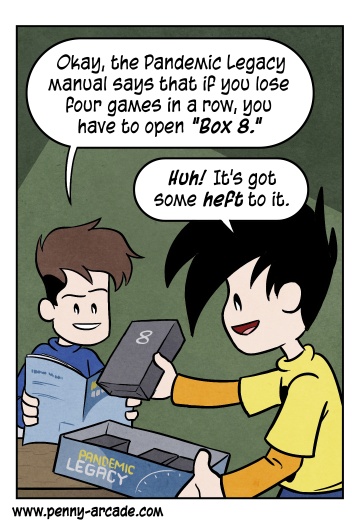 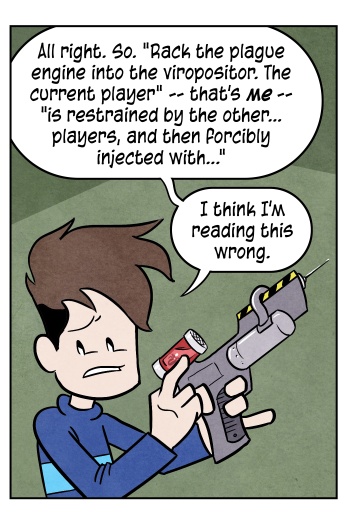 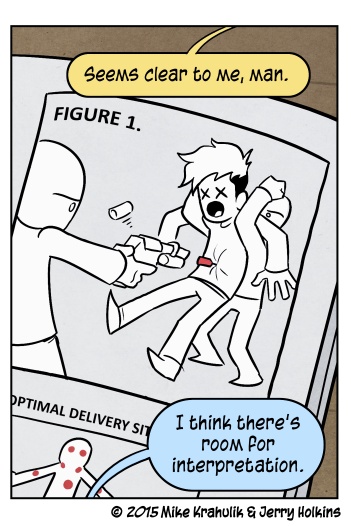 Writing comics with a not-mike - of which there are many, the Earth is lousy with them - was bizarre. I talk with a lot of people about their comics, but it's in the manner of a Consultant, where I make pronouncements of various kinds and then make my escape shortly before any actual work needs to be done. This time I had to actually forge a connection with another human being and then try to run signal along that connection. It was… novel. I had a super good time with Kris Straub ("Krasp Strib") plumbing the figurative depths of bat sex, but the rest of the time was good too. Every second could be recommended on its own terms.

I invited Kris over to Kiko's hotel to play a round of Pandemic Legacy, thinking it might offer up a cluster of juicy comics, and that ended up being true. It was part and parcel of my effort over the entire weekend to sell as many copies of that game as I could. I don't want to play any more games on tables that don't have the word "Legacy" hitched to the back like a caboose. I want Catan Legacy, Magic Legacy: The Gathering Legacy, I want Ladies And Gentlemen Legacy, and I want Warmachine Legacy.

Kris was brought over for research purposes and also so that we might leverage his diamond mind, and he ended up becoming crucial to the process: we didn't play again without him, and he's been there for a full third of the game now. The game unfolds itself as you play in various ways, the way that table groups do also, and we incorporated some bizarre rituals whose origins I can't one hundred percent trace. For some reason, we pronounce every town in the most Italian way we can? Even if the name of the town is already Italian...? So that even Milano becomes something like "Milaniccio". I don't know. You had to be there. And I was.

The question I received more often than not about the game - I refuse to say that much, even the mechanic we mention in the strip is borderline to me - is whether or not it's still the same old Pandemic, which is to say "a game where one person tells every other person what to do." I try not to play games with people like that in general, but yeah, that personality has a very free hand in a game where all cards are shown and dialogue is specifically established as a game mechanic. I don't think it should dissuade you, though; the polymorphic nature of the game will be a good opportunity to watch that person sputter.