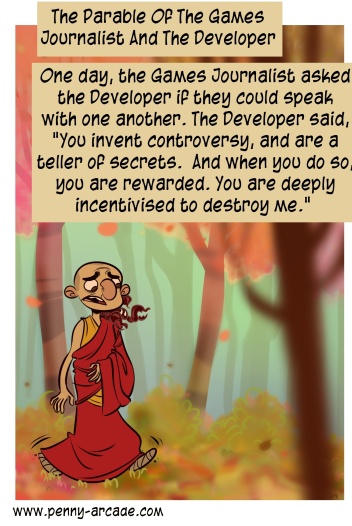 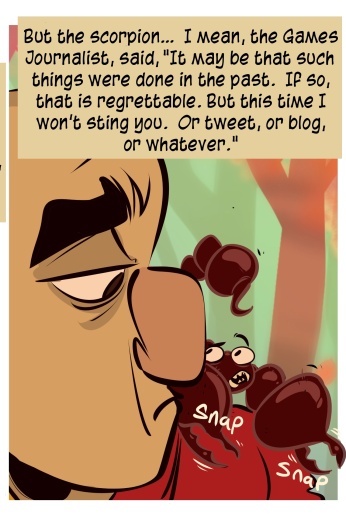 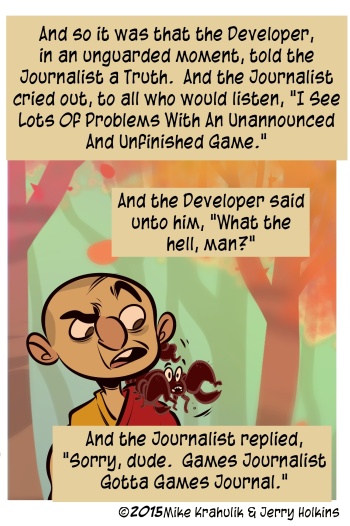 Lightly paraphrased from the original.

There was a period of time, not even that long a period of time in the grand scheme, where a kind of collaborative back-scratching arrangement was in operation between publishers, the developers in their charge, and the enthusiast press. It has not been dissolved utterly, but you can tell from the increasing percentage of in-line ads for not games that something key has changed. Couple that with the fact that the real action from a promotional perspective is concentrated in a single, scruffily adorable Swede and the spine of the thing is laid bare.

For years, I could never make heads or tails of the access granted to outfits whose primary contribution is aggression either towards the creators or the users of games. One some level, the agents of multinational brands want to be "liked," for business reasons but also for the regular human reasons, but that couldn't have been all of it. I think it was mostly just inertia: these are big ships, and they've been moving in a certain way for a long time. They were like British Soldiers, lining up dutifully for war against a guerilla force.

We'll never know why or when or even if Bethesda or Ubisoft "blacklisted" Kotaku, as Kotaku claims. You would need a team of PhDs and the Large Hadron Collider to determine precisely how little I value their claims on any topic. Though, I can understand why a publisher might determine that an increasingly hostile outlet whose business model is "Start Shit" might not be the best time or money investment. And you may say, "But Jerrzorz!" and that's all you'll get out because you're going to look down at the floor for a second and really think about it. Why did it ever work this way? Why would you be obligated to spend millions of dollars on something and then place it gently on the black altar of a hivemind cult, bowing as you retreat? The old accord is over. Go buy your games at the store. Do you not understand that this is literally the best thing that ever happened to you? They don't owe you shit, and now you don't owe them shit.

Having been the cowering creature beneath enthusiast media's Eye of Sauron on more than one occasion, the object of their tender ministrations, their ostensible populism and their eerily synchronized perspective, I have no sympathy for these creatures. Which is to say, I have the same sympathy they express for those outside their cloister. You may feel very confident that there are conversations at every publisher now, wondering to what extent they are required to eat shit from these people.