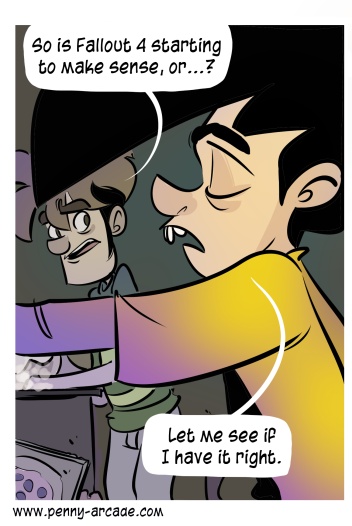 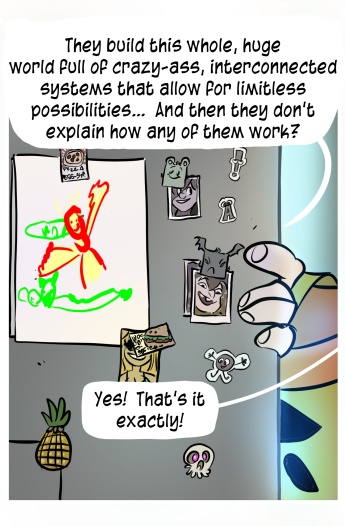 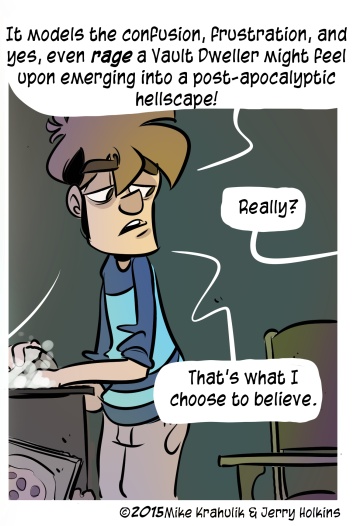 (I have been told that for several hours the entire post was a single, gigantic link. I did this as a radical UI concept, to maximize the surface area of the hypertext. Gabriel said it looked like a "broken link." Pearls before swine.)

There are some Fallout specific things in there, certainly - or things meant to honor its legacy - but there's a lot of generally just sort of Bethesda stuff in there. So, so much that I tried to explain to him: "Bethesda" constitutes a coherent genre of which Skyrim and the new Fallouts are manifestations.

The main thing he had to do in order to settle into the game - by which I mean the subset of Fallout with which he, himself resonates - was to throw every idea about "proper" play in the garbage. Open-World Paralysis Syndrome (OWPS) is real, and when you aren't super up on some of the basic laws of a system you can feel like you're missing even more.

There is a kind of clock that starts for him the same time he starts a game, it has to roost in him by the end of it, and this timer is short. That's not how I could do it, but it's something I respect; he is always precisely himself, and I always assume I'm wrong. But! He had to say "no" to a few things just to maintain momentum. For example, by the time he was really getting into it, he hadn't really set up much of a town. I don't know if that is ever going to be a big part of the game for him, but if you ever want to feel like you've had a productive Tuesday, or whatever, clearing out five or six rusted cars and a big pile of tires can scoot a day over into the win column.

He's playing it on console, which I've never been able to countenance; I get hives thinking about gutting a ruined grocery store with the analog stick. I will tell you that what's he's playing on the PS4 looks pretty Goddamned good, though. My machine at home does not fuck around and I was still impressed. We I saw him clutching the PS4's devil-yoke on the couch, I had installed a kind of pre-smirk that I had to pivot into a sort of constipation thing; I don't know if I sold it all the way. The trees I saw certainly looked sapped of their natural vigor.

What I saw there, graphically, I would have been perfectly happy with - which just tells me I haven't spent enough money on this computer yet.