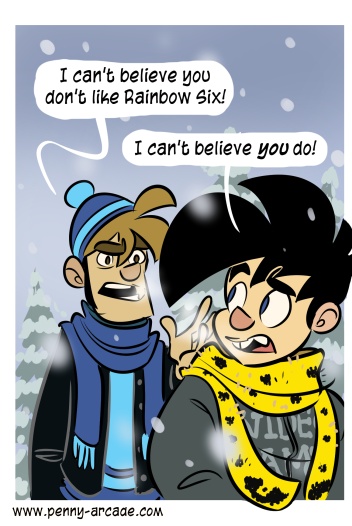 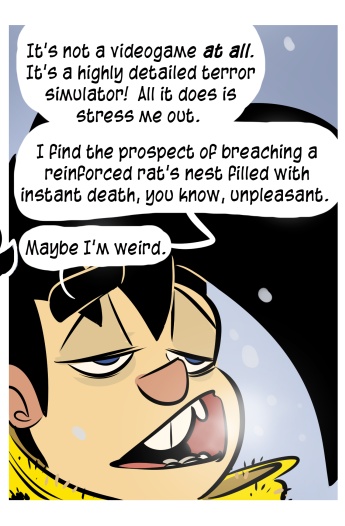 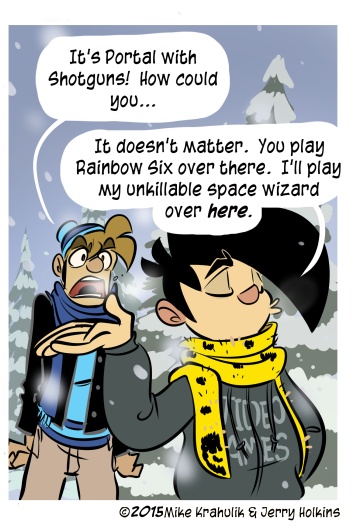 I realized, with some horror, that we had not covered Gabriel's perspective on Rainbow Six, which is that it is "bad" and also "not good." What's more, perpetually descending into fortified lairs is not, for him, a scenario correlated with relaxation.

What's strange for me is that I hear every one of his arguments on the topic - the shooting is not especially slick, it doesn't really look that great - and not even disagree with them. It's just that in the overall mix, assessed with a kind of Ludic Spectrometer, these aspects are rigorously deprioritized.

Just as I suggested in the strip, Portal is actually the touchstone for me here. Remember that Rainbow Six as a franchise didn't even used to show you your fucking gun. Shooting here is like the period at the end of an elegantly constructed sentence; it is simply the demarcation between this and that, without any claim to its own state or properties. Apologetics, to be sure. I get like this when you show me something I haven't seen or even considered before. I've been looking at this shit for a long time. That's getting harder to do.

No, somehow these warlocks have made a kind of competitive puzzle game, a spatial one, that pretends to be about the GIGN or whatever when it's actually about manipulating Euclidean space. It's about physics and communication and tactics before it's about submachine guns. This is the closest thing to a competitive IQ test I know of.

The problems I have with the game are almost entirely to do with everything outside of a round proper. I don't find that the currency systems, hewing with dangerous proximity to the hated edicts of Codex Freemium, have impacted my play at all - that's not the problem, and I expected it to be. I don't even know why it's there if they aren't going to turn the screws; they're like sheepish mafiosi, offering to pay for dry cleaning. No, the problem is that their systems for joining games often just inexplicably don't work. You'll have five people in your party, enter matchmaking as a unified front, and then not be able to "find" teammates. People get disconnected from games in the middle of executing the most flawless and cinematic plan the mind can envision. I tolerate it for now because it grants me entre, however finicky, to a suite of radical concepts; that won't last forever.