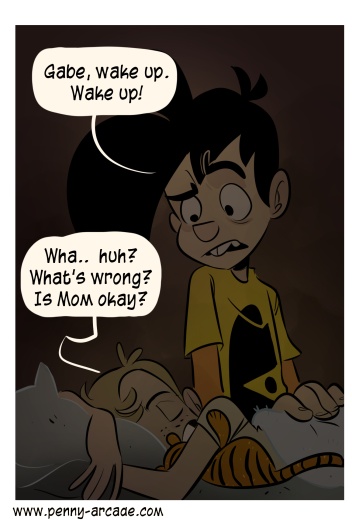 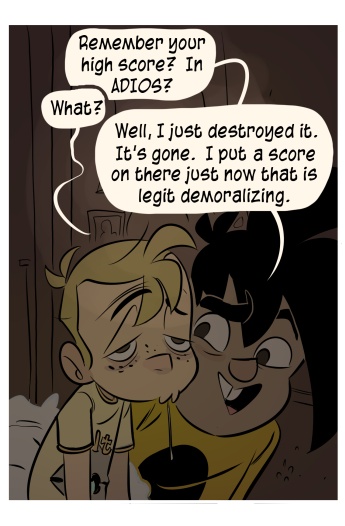 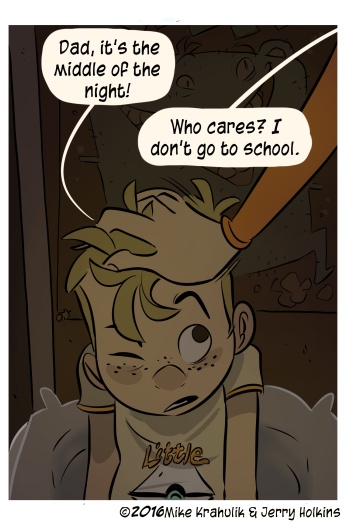 Gabriel and the other, actual Gabriel - The Gabriel currently contained within the parenthesis of the first - have been delighted by a game called ADIOS, which is the clever truncation of Amazing Discoveries In Outer Space.

It's always funny to me when he rolls up on something like this, something I would consider "my" kind of game, and then starts regaling me with it. I don't even know how he's stumbled onto this shit, weirdo shit, as private to me as the inner surface of my eyelid, but of course he's playing this stuff on the Playstation 4 and not on the computer where it would be good and proper to do so. Holy and correct. In unison with the divine.

Gabriel the Elder did actually undertake the high-scoring feats we detail in the strip, but I can't remember if he woke him up or not. The pride he felt was real, though, and it was his preening that brought these events into our hallowed arena.

We got a question at a PAX once - Prime I think, or… PAX West, as I think it's called now - about how I felt when my son defeated me in a game of some kind. The presumption was that this would be a bad thing or that I would feel some kind of shame; that there might be a sackcloth phase within which the mourning of my masculine vigor would be contained. It was asked by a young man who could not possibly know the truth of it: that losing to your son (or daughter, as I have had the great pleasure of doing in Gobblet Gobblers is the victory condition. To have created (or, you know, been adjacent to the creation of) your superior is nature's edict, and I am its yielding vassal.

I have a policy that is my father's policy, or was his policy at any rate, when he existed, that I do not pull punches when playing games with kids. He was a miserable fucking cheater; that I don't do, though I learned an important lesson there also. I play games as though the AI has been set to its most vicious level, one which bears Skynet's molten hatred for the human foe. When they beat me, it gets filed away.

I don't play games with my larvae asymmetrically, so there is no score chase aspect; I wonder if I am depriving them of potential ludic power. The only way to determine raw efficacy for these competing policies is to make our children battle, in the umbral manner of the Shadow Dads.