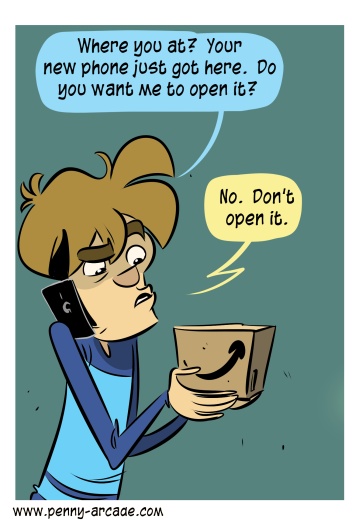 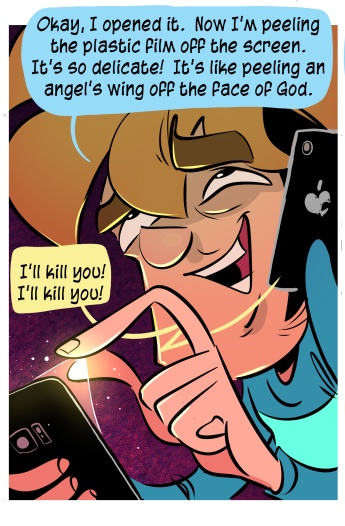 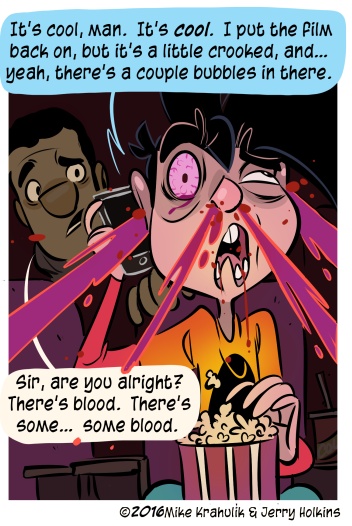 Because Michael craves novelty, he is making the leap over to the Android side of the equation. I like novelty in some contexts, don't know if I crave it exactly, but God Damn if this motherfucker doesn't need to touch and swipe on an expensive new rectangle every few months.

I don't need to do that, but I'm glad he does; I'm glad that he has these wriggling, besuckered tentacles. I need somebody to change the objects around me every now and then, to seasonally adjust my life, so that new stimuli is present. The comic is literally just the conversation we had, but you should know that I would never do that. It would not be parsed as humor. It would prick him in the dark, violent mist before thought and when he regained volition I would already be dead.

I could probably spend every day for the rest of the month just talking about all my Virtumal Realmz, with the maniacal persistence of a one who desires beyond all reason to show you their pokeymans. I won't do that - it sounds disturbingly like work. But some of this stuff is too interesting.

My previous experiences with VR have been with early Oculus Kits and the occasional abortive attempts which have occurred in previous decades, primarily in pterodactyl-oriented experiences which were all the rage then. Essentially, the way these worked was that you ran something and then put the headset on and most of the time it showed up. Then, you could take the headset off, execute another application, put the headset back on, and now you're being fucked by a creature who, if you had to guess, was some kind of flamenco tyrannosaur. Or, whatever. You know.

In & Out is perfectly acceptable as a name for your hamburger venue but it's not the best as a usage case here. These days, VR has matured to the point where the truly disorienting part is taking the headset on and off. One of my favorite things about the Vive (though any serious conceptualization of virtual space would require it) is a kind of Limbo it has, like a test pattern, that exists independent of any particular simulated place. The presence of this place, all by itself, the fact of it, means that you can open and close Vive software from inside the Vive and in a completely useful way. I hit a button, and bam - like Neo in the Stockroom - here's my Steam Library, rendered in Big Picture Mode, for me to choose what I want to do next. If I'm in a game, I push the same button and things pause and become transparent while Limbo asserts itself with the menu I've just described. I can exit the game from there, check messages, whatever - normal shit. In order for this to be real, and not simply cool, there's a lot of inglorious work to be done. They have to build a ground floor that supports everything else, something legible, but also tasteful and trustworthy. And that's precisely how it feels.