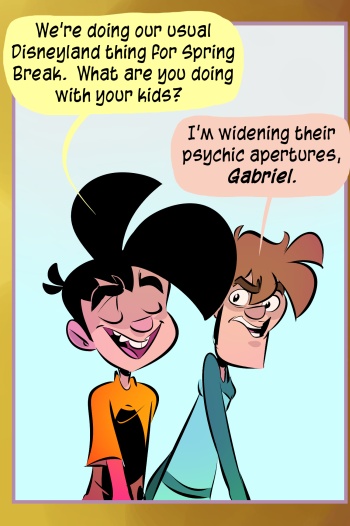 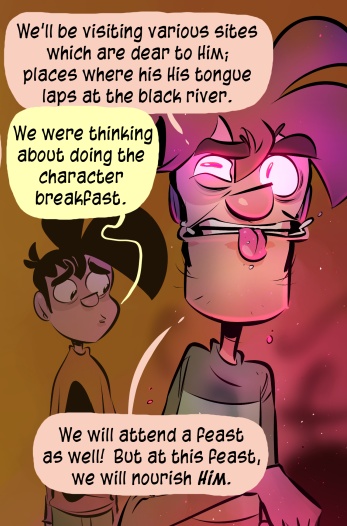 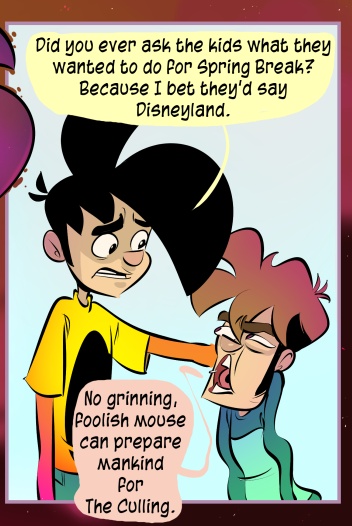 We went on Vacation! And now we're back. But Penny Arcade always exists, and in precisely the correct amount. Penny Arcade cannot be created or destroyed.

Last Summer, Card Hunter released an update that allowed players to go through the entire campaign in co-op, and it basically reset the clock on my infatuation with it. I loved it from the jump, essentially; a hand-made dungeon crawler with glorious art, its tongue installed firmly in the pocket of the cheek, where you build decks just by equipping the loot you earn.

It wasn't long before it occurred to me that my party - a cleric, a wizard, and a warrior - could be mapped quite well to Acquisitions Incorporated. And I knew that they had costumes and stuff on there, so I sent them a mail to see if they would want to do some costumes. Here, I'll include the text of the mail I sent to Jon Chey at Blue Manchu.

I have a weird idea, and maybe it is dumb, and if so, then it's okay if you don't like it. Nobody likes dumb ideas! Okay.

We perform Dungeons and Dragons as live theater, and have for coming up on Ten Years, under the name Acqusitions incorporated. Our main party is a dwarf warrior, a half elf cleric, and a human wizard. You see where I'm going with this? Is this too dumb, or is it cool?

And here's what he sent back:

I like it, Acquisitions Inc is very cool and the characters are a great fit for CH. Would love to release that Tycho figure too.

I have a weirder idea, which probably *is* dumb. What if we did a Acquisitions Inc themed expansion pack - full adventures instead of just figures?

Eh, now that I think about it, probably not feasible. Still, just doing the figures would be awesome.

But he was WRONG because I completely wanted to do that. I wrote the fuck out of this thing. There are a couple different stories for Acquisitions Incorporated on the site, Vault of Winter or Acquisitors, but this was a chance to do a longer, weirder story that I could trick you into reading because it was also a game. It's got three stories, with three battles apiece. It's literally what is best in life. They made a trailer for it I thought was really funny based on some of the intro text.

If you haven't played Card Hunter before - I play it on Steam these days, but it plays fine in a browser - some of the twists in the expansion won't be apparent right away. A lot of its mechanics are twists on the expected from the base game. The first time you play through the new stuff, you play as preconstructed character decks for Binwin, Jim, and Omin - voiced by Scott, Mike, and I respectively. If you beat them, you can come back through with your own characters in a Hard Mode that lives up to its name.

Occasionally, in a film or show, a person will say something to the effect of "do you know who I am" and often the person doesn't know who they are or doesn't care. When it happens, we're supposed to feel a combination of pity and schadenfreude for them known "pschadenfroidity." Except I'm the one who needs to be reminded who I am in this case. There are times, like this, where I can marshal incredible resources and collaborate with interesting people to make something really cool. And this is really cool.