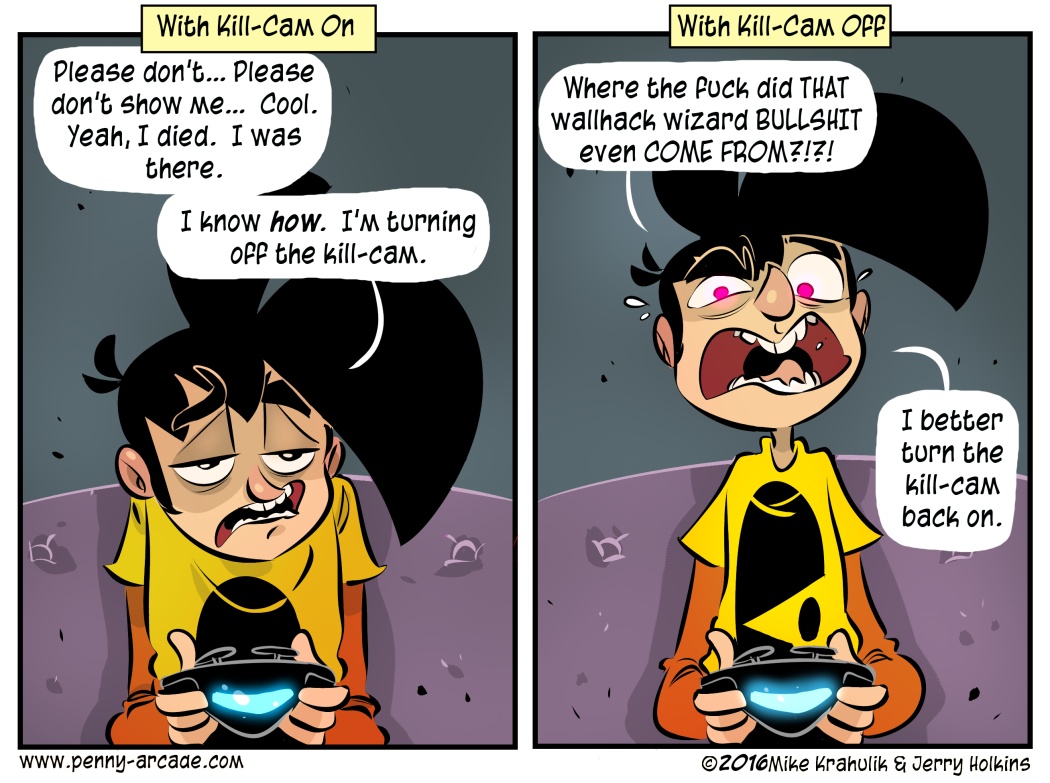 It never occurred to me that I should turn the deathcam thing off, but I guess it's not surprising that you can; there's far more granular options clanking around in there. Just for my own purpose, to track this over time, I will say that it's getting to the point where my Zarya is no fucking joke and Genji ("Genjamin Franklin") and that in my hands Genji continues to be an inscrutable, ineffective roboman.

The sorcerer here at Penny Arcade that makes sure you can see all the things we make - The Rack Whisperer - sent me a link to a Quora answer about nausea in VR that was deeply unlike anything else I've seen about it. You and I are literally rubbed in the spice of enthusiast media - for some values of "you," you might be a generator of same. We're both offering up hot hype about this shit on the regular. I'm not saying that we don't believe it, just that we are creatures of an environment where what we think of as universals might not be, you know, a hundred percent universal.

For example: if you were to ask me about nausea in VR, I would say "It's not really a thing anymore." But VR is an umbrella term that includes multitudes within it: I have played for an hour or more in the HTC Vive without ill effect. I guess "ill effect" could be considered a pun, but I'm not claiming it. There is something about the combination of the visible hands and standing that seems to give my brain whatever it seems to need; I'm good. I'm less good with seated experiences in general, and I'm less good with regular controllers that aren't flightsticks. It's fine, but not the best. So when I say it isn't a thing anymore, I mean "It's not a thing for me under very specific circumstances I don't explain." I'm still bullish. Gabriel can't use the technology at length, regardless of the specific format, and it's not for lack of trying. Neither can his family. You can push through for a bit; novelty is a hell of a drug, but it eventually caught up to him. By comparison, my family is great and is fully congruous with the future.

I was surprised when stats came out a month or so ago estimating that there might be fifty thousand or so Vive HMDs in the wild. In the world I live in, I know multiple people who own the HTC Vive and Valve is like twenty minutes away from here. That world is unlike "the world" in several key respects.

What this means is that the PSVR is the first time we're actually going to know shit about the compatibility of this technology with the human animal, as a consumer "toy," as opposed to the self-selected acolytes of the future, a cadre of which I am a part. I'm not engaging in dark prophecy; that's not my business. It's going to be the Sony offering - precisely because of who it addresses, and at what scale - with the revelatory payload.