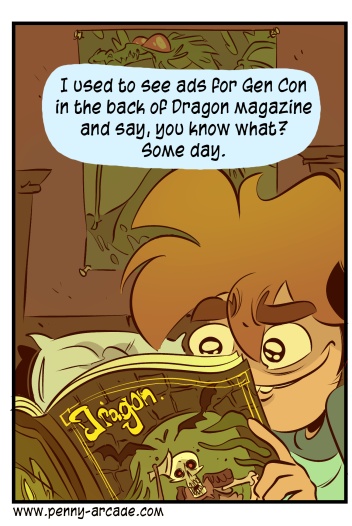 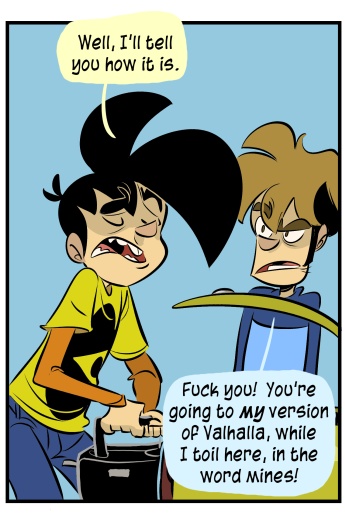 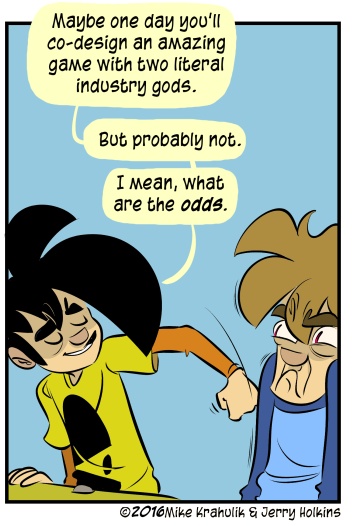 There's a few conventions I've been meaning to get to; I think I've said I was going to MAGFest a few times. I will someday. People seem to bloom when they talk about it, and I'd like to get some of that. But for years and years, Gen Con essentially defined what a convention was even though I'd never been to it and had no real way of learning about it, because it was just a picture I'd seen in a magazine. It wasn't simply an exemplar of the form, it was the entirety of the concept, moated between two deep parentheses.

For an image, it certainly seemed to expand into three dimensions with little difficulty. It gave me two points, and then I just made a third one up entirely out of my own fevered wishes for a shared cultural space. Gabe found out about it a couple years ago and now he's going. Imagine a pair of pixelated sunglasses descending from a clear, blue sky and coming to rest on his nose. That's the situation I'm being asked to deal with.

Like he said, he'll be there with our allies Lone Shark Games to show off the very latest "build" of Thornwatch. The bones of previous versions are there, but… the flesh! It has sinews! There are now muscles that tug the skeleton around. You'll also be in a position to see a bunch of new art. I don't know. I mean, we're taking it to Gen Con for a reason: to have an elite cadre bang on this thing. We want to set it against them, and have it be tested. The hope is that we may catalyze what's known as a "Reverse Vegas Scenario," or RVS. Historically, phenomena that occur within the confines of Vegas remain situated there. With the information we pull out of this show, it could be the opposite situation. Thornwatch may be ready to go absolutely everywhere else.