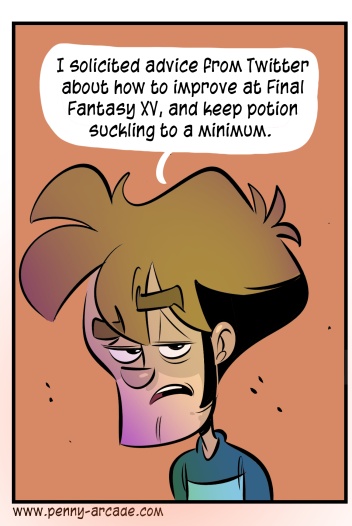 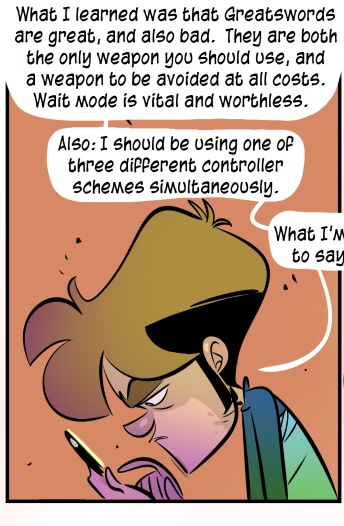 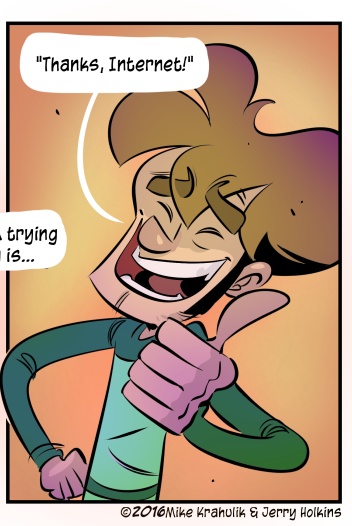 You know what? I think I DO like Final Fantasy XV. Enough to solicit aid from the Internet, which went more or less like a Web "It's Cancer" M.D. search generally does. I'm being uncharitable. In truth, their advice made me a thousand times fucking better at Final Fantasy, which I was playing one hundred percent wrong.

I would like to pause here, briefly, and say that it's pretty cool that if I need tech support on my Magical Prince I can get that from a metathrong of experts, somehow abstract and discrete simultaneously. In the strip I gotta be whoever and react in some ironical way. But here, I can speak with greater granularity: I think I got different advice because it's possible to succeed here in different ways.

The comparisons to Dark Souls came fairly quickly, and I hadn't mapped it to FF because I was playing it like a Goddamned idiot. You don't actually want to be in the mix at all. If you are in the mix, and then somehow inexplicably remain in the mix, whatever results from it is your (that is to say, my) fault. I was brute forcing the combat because in some ways it looks like a brawler situation when it's actually a system where… hm. Imagine a turn-based system where everyone is taking turns of distinct lengths, all suspended in a kind of overlapping, chronological sequence. It looks like whatever President Obama gets in the morning: a ton of color coded, time-gauged rectangular fields, all meshed in a kind of stonework. When you commit to something, like a Greatsword combo, you need to keep in mind that enemy "turns" can intercede anywhere in there. So if you are going to be that guy, you need to know how to be that guy.

One tip I received was to activate Wait Mode. This is a modality that stops time whenever Noctis stops. They didn't suggest that I leave it on; rather, they suggested that I use Wait Mode like Training Wheels to get the cadence of the combat, and that I would eventually discard it because I wanted to move faster. That's precisely what happened.

The last three bits that improved my whole deal are here: you're immune when calling on your friends to use their skills, and you're immune when you warp to the aptly named Warp Points, where you regenerate quickly - at least for me, as a player who is still kind of bad, relatively frequent invulnerability is a huge part of the strategy. Somebody mentioned a weird one I haven't played around with yet, which is that you can change your friends' skills during the middle of a fight. I would not have discovered that on my own. But there's things you want to do up front, and there's things you want to do later, and apparently - apparently - you don't have to choose.

This is what it all meant to me, anyway, the aggregation of advice I desperately needed, and I've largely weaned myself from potion addiction when fighting trash mobs. I still have a lot of thoughts about FFXV, but I'm still thinking them. I will get back to you.