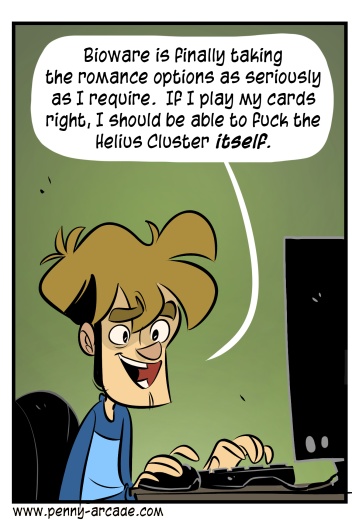 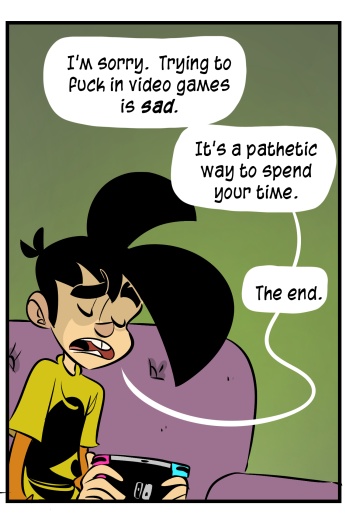 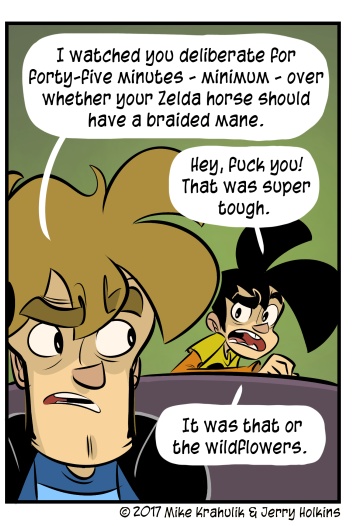 I haven't had sex with any "entities" in Andromeda yet, but, you know, I've got my eye on a sextupedal "physical dream" called the Bright Cogitant and some kind of crab with time-travelling genitalia. I'm keeping my options open.

I have the Real Boy version of the game now; my trial was rapidly moving into the Gourd Phase. This trial "ended" at a point where I had started to become curious, and now I have enough curiosity to grease the experience somewhat. The further I get, the more I think the writing is an intentional tonal shift as opposed to a complete misfire. It can still be amateur; that's a separate conversation. But meaning to do something that doesn't land with a portion of their audience occupies a distinct portion of the diagram. I'm open to the idea that it was written for someone else.

Hey! Tomorrow at 3:30PST is the second episode of Acquisitions Incorporated: The "C" Team. We had a blast at the intro, which you can catch up with on Twitch or on YouTube right here:

Let us know what you think; we're hoping to roll out a Podcast of the adventures also, as I've gotten a ton of requests for that and I want you to be able to get at this shit however you want. This afternoon on the stream, Mr. Gribs and I are gonna be Twitching The Switch, which sounds like a nineties sports movie. Trying to figure out if it's gonna be Zelda, Snipperclips, or BOTH. Might be tough! Roll through around 2PST.