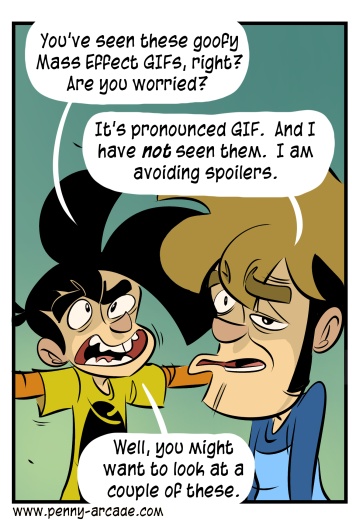 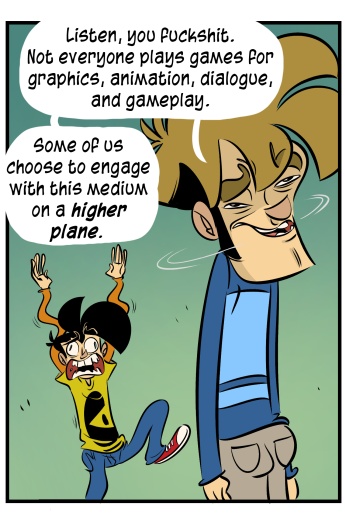 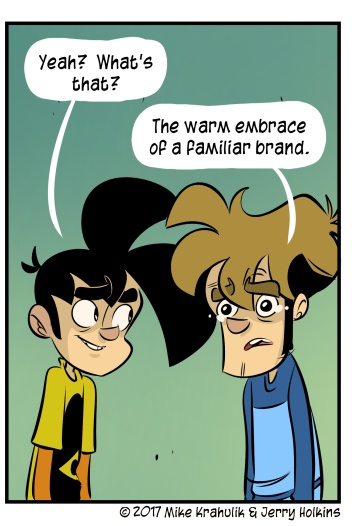 Hell yes I joined EA Access to play Mass Effect: Andromeda over the weekend. I don't hate it.

Many, many years ago I went to a restaurant with Brenna that had a sommelier. He was insufferable in precisely the way I respect, champion, and endeavor to exemplify. He was clearly a Word Fucker, and actually opening his copy of the Merriam-Webster's unabridged would have involved a Hazard Team and industrial solvents. I don't know anything about wine, which delighted him, because then he could project even more of himself into social space. He described a vintage we had inquired about with a chuckle, appending: "Ah, yes. That one? Young. And foolish."

He was not making a moral judgment. He thought the information was pertinent. Being young and foolish can be delightful; it can also be youthful and unwise.

The stuff about the animations you've no doubt seen on virtually every news site calling attention to specific moments hasn't been as bad in the moment. Some of them, like the janked running on the stairs, I can't even reproduce unless I run forward while rapidly alternating between presses of A and D. I don't want to tell people they're doin it rong but that's not my customary mode of interaction. In any case, the problem for me hasn't been the animation and it certainly hasn't been the combat. And I'm not opposed to Mass Effect: Inquisition in concept, but. The writing in this game is young and foolish.

I have a reputation as "the one who likes shit," so let me tell you now, thus augmented: I would not have finished the tutorial if this hadn't been Mass Effect. Right now, they are taking time from me the game has not earned - and they are only starting to earn their way back out of debt something like six hours in. A charitable reading is that they are explicitly, as opposed to accidentally, channeling The CW. I don't understand why any of these people are acting they way they do. I can't tell you how much I hate writing this.

I ended up putting way, way more time into Mass Effect 3 multiplayer than I ever expected to, and I suspect that may be true here also, because it's cut from the same cloth while absorbing the immediacy and impact of the new combat in general. Also, doing these missions can farm resources for your character in the main campaign, so… yeah. We're done here. I've had very confusing instances of lag, though, lag that lasted the entirety of a single online match, but… I didn't leave? You wouldn't believe how effective I was when everything was slowed down to a fifth the normal speed. I suspect this is how Kiko sees the world.

So that's why the reviews look the way they do, maybe. It's all people holding their own knees, muttering, rocking back and forth, wandering the halls trying to pull apart, rack, and sun-dry their feelings about it. Thus far, I am mostly confused.