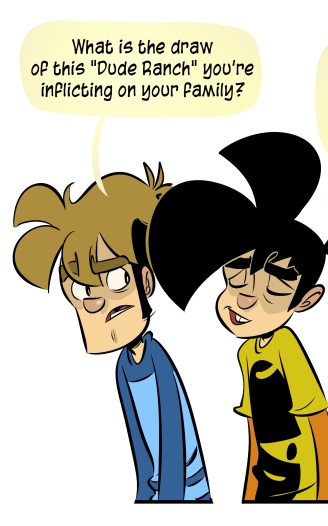 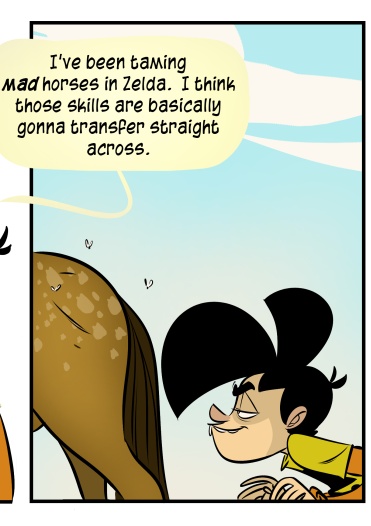 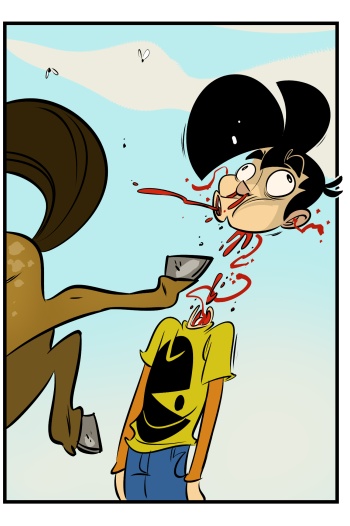 We have another strip on the topic of Gabriel's desertification, I think that's on Monday. His first day back in the office was yesterday, and his posture seemed to have been altered drastically. He was taller than usual and… I don't know how else to put this. He appeared to have a spine? I don't know what Arizona mineral he absorbed but whatever it was it seems to foster the wearing of hats.

Today's strip, though, involves cross-applicability of virtual skills. I understand that his family named their horses after digital horses they'd claimed in a videogame, completing the circle. It sounds like they brought the Switch with them, yea, even unto that star-ravaged plain, where it got the kind of use we all assumed was confined exclusively to a kind of marketing fantasia. They just released the Jackbox Party Pack 3 on the system, which… I mean, I don't know what to tell you. This is killer app territory and I'm not making a fucking joke. This is a vision of a society we have yet to become. That kickstand is gonna be putting in work.

Hey! New episode of Acquisitions Incorporated: The "C" Team. Specifically, it's Dungeons & Wagons: Part 2, although there are many alternate suggestions for the name that have been suggested. Cart Blanche, for example. A La Cart. Or, simply, tastefully, Dungeons & Wagons: Cart 2. The next episode is called "The Vespertine Order" unless I change my mind, which I probably will.

Later today, you should be able to catch it on YouTube or via the Podcast Feed for the old school, or just grab it on the iTunes.

My long term fantasy for all this shit comes in the form of a legit Acquisitions Incorporated sourcebook that has all the crunch for franchises, cool things to spend your gold on, the customized parts of the setting I've written, and a campaign to get the party started. Hashtag double entendre, of course. Putting out an RPG sourcebook is one of those things I didn't realize was a dream until I start thinking about it. It would put such firm parenthesis around such a vast part of my life that I'd need to manufacture a new identity to continue living in any useful way.