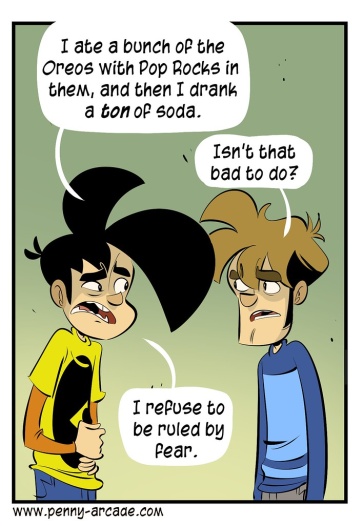 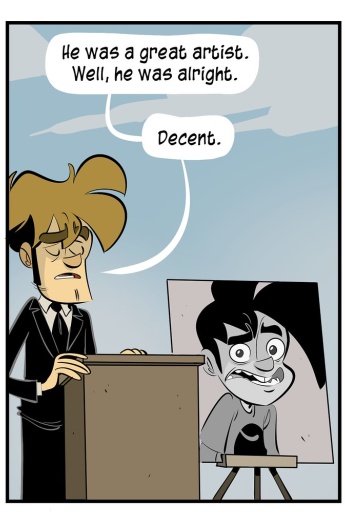 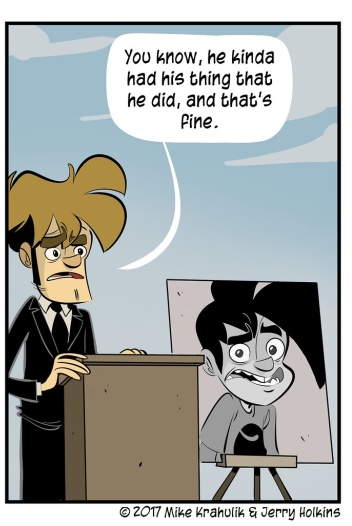 You might like the podcast for this one when it comes out; the true origin of the strip is divergent from its terrifying new form.

We are going to be a doing a new show on the Twitch stream. The scam I have historically tried to pull in my life as a person who makes and does things is to try and work it so someone pays me to do something I would have made or done for free. I probably shouldn't say that outloud, but since the contract is already signed I think we're in the clear.

Penny Arcade Plays: Warmachine is a four player tournament we'll be streaming live from the studio every Tuesday from 2:00pm to 4:00pm PDT, beginning 5/30 (next week!) and running through 7/11. Warmachine and Hordes publisher Privateer Press was in the studio because they're like twenty minutes from here, and we had their own Will Shick to handle judgement calls and give suggestions - you can watch that session here to see what the show might be like. If you're a newcomer or are considering wargaming, don't be scared. This is not going to be super hardcore by any means; this is essentially just a way to show you something cool, have fun, and see if you might like the hobby. Who do we have playing? Well…

We've got our own Kiko, who is the most experienced player in the group. Strong painting skills, too. He going to represent Khador, which is basically a steam-powered Soviet Union with war robots. He knows how to use them. Let's say that.

I am Tycho Brahe. But I am also a mad prophet of The Lawbringer, Creator of Man - which means I play Protectorate of Menoth. They're a great faction with the best color scheme, cool-ass synergies, and lots and lots of fire. The Rivalry I have with Kiko is such that it requires a capital letter.

Next up is CalamityJamie, a.k.a. My friend Jamie Dillon. She worked with us on Child's Play back in the day, but now she's streamin' non-stop, rocking consulting and charity stuff, and bein' rad. She used to play Protectorate of Menoth, which is the correct choice, but now she's playing "goodie two-shoes" Cygnar and the betrayal is real. The Swans, Jamie? The fucking SWANS?! She's a great painter and a savvy player with tournament experience.

Last up we have Erick Blandin, who works at Child's Play Charity, incrementally improving the world. Which makes his choice of the Cryx faction ironic, because that's basically the opposite of their deal. They are scary, fast robot zombie monsters that glow green because they are bad, bad, bad. It's the faction I find most scary to play against. He's pretty new to the game, but you can learn along with him.

The final round will streamed live from Privateer's festival, Lock & Load 2017, on 7/15. It'll be me and somebody else. That was… some trash talk. Did that come across in raw text? I'm a very intimidating character. Is this working at all.

Hey! New Episode of Acquisitions Incorporated: The "C" Team just hit Twitch - Homecoming, Part 3. There's also a fresh Table Talk to slake your afterthirst. Also if you're naked from the waist up and don't want to me, we have a few keen suggestions for that region.