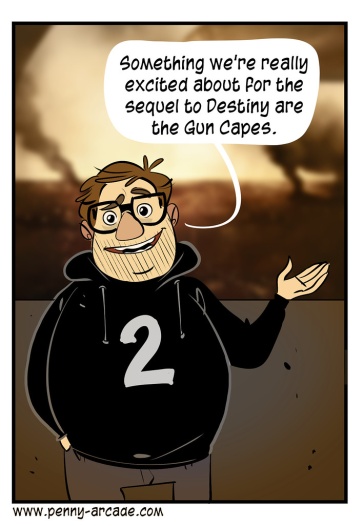 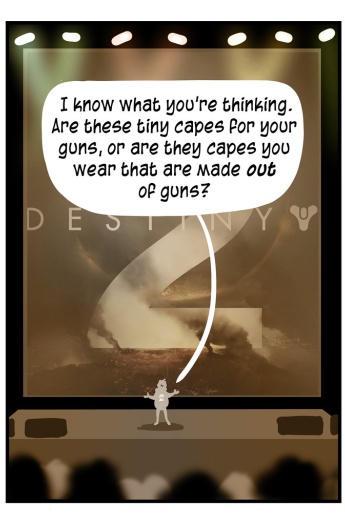 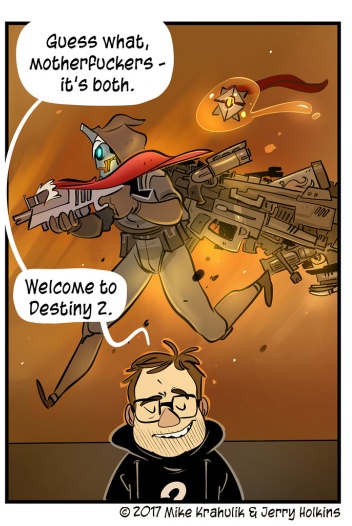 I was very, very late to the game on Destiny. As someone whose primary axis of engagement with Bungie was via their lore, please act surprised, Destiny as a launch experience was missing the nanoscale furrows that would give me entre. Or, it sort of was.

Things definitely happen in the game, but they occur in a kind of dream logic which might have been caused by any number of things. As the anchor for a "ten year game," you don't really want to paint yourself into a corner too early. There was also significant creative turmoil at the time that caused something between a rewrite and a wholesale crop burning of the story. Occasionally, when I would shoot an alien's head off, the game would tell me that I had been granted a Grimoire Card. This is where the story actually is, and it is related with profound success, but outside the game proper. I've railed against this. I think it's possible to incorporate greater narrative exposure into the gameplay. But I'm also wrong, which happens a lot.

Different media are capable of different outcomes. My wife and son literally can't be spoken to while they are reading. This made me really mad until I began to truly understand they didn't know I was there. You can't get mad at a person for not responding to stimuli they don't perceive. It's like getting mad at someone for something they did in a dream you had. It's not fucking productive. But that power to overwrite reality essentially comes for free with plain text. It's insidious, and it always has been, which is why writers get into so much trouble all the time.

The Books of Sorrow are a series of Grimoire Cards that tell a single tale with profound import for the setting and the content you experience in it. If you animated this whole thing, I don't even know if it would work. I'm not sure it would be produced at all. But it's my favorite piece of work in the entire Destiny universe and it informs my relationship with the game. I would be very sad to see this channel of story transmission go because I've seen how profoundly successful it was. As a fraction of budget, the relative value of the Books and other shit - particularly where Rasputin is concerned - can't be overstated. At least for me.

There's a lot of new Destiny 2 info churning out there now; of course, we have distilled the optimal lozenge.