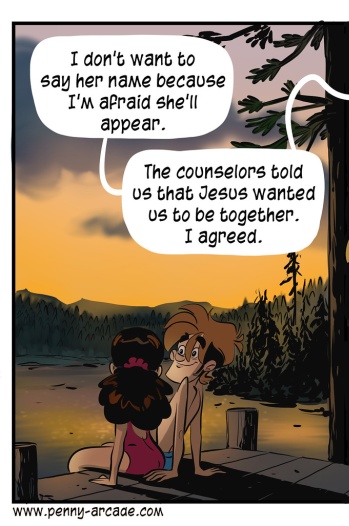 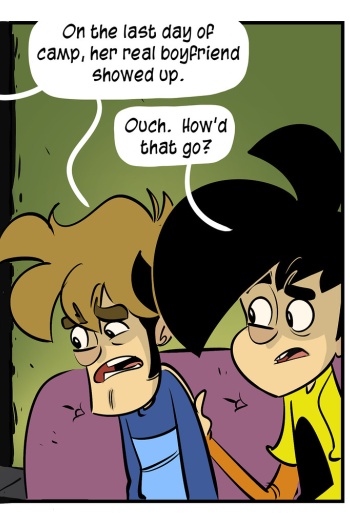 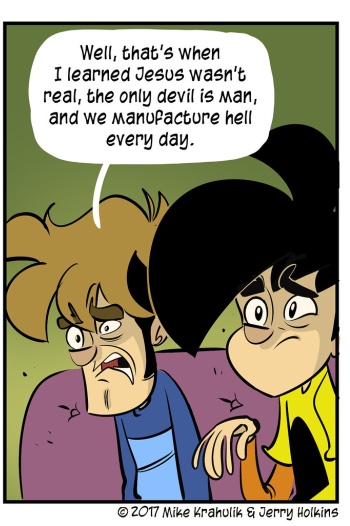 I have every faith that I've said something very much like if not identical to the last line in the strip. I could apologize, I guess, but I'm not 100% sure it isn't true.

There is a more detailed version of this tale presented in an old post, maybe, what… fourteen years old at this point? I have a condition where when I remember things I also feel all the feelings in the memory. It makes forgiving people very challenging because even if I've developed an antibody to, say, a Betrayal, I always feel that first when I go back.

When I think about it today, that is, when I think about her, after whatever is there initially I feel such profound gratitude. She granted me such a perfect pain, a kind of irreducible liquor of teenage grief that I could just lie in bed and feel. I wrote terrible poetry and I wrote even worse songs. It was formative, and the only thing I could do to defeat it was write. I owe her a lot. The writer in me has to admit that, yeah. This is a better ending.

- We have our deeply inedible (yet still, somehow, delicious) Summer Treats Pin Set by Gavin up on the store today. I'm obsessed with it. And yes, it's not an illusion: they actually do have the raised gumball-eye type things. "Pinthusiasm" is generally Gabriel's domain but I'm obsessed with these iconic representations and, in some primitive part of my mind, long to worship them.

- The latest episode of Acquisitions Incorporated: The "C" Team is up - and what better way to celebrate than with a collaborative cotton "breastplate" cooked up by Gif Wizard @jbrooksdev and our own Dabe Alan, who is sometimes called Dwob Dwob (almost exclusively by me)?

- We need to make room in the warehouse for a bunch of our new ideas, and so we are having a Garage Sale! That's correct: a sale, from the Garage, on August 12th.

That's right - choose your time, grab your ticket, and then watch as your ticket price is effortlessly transformed into an equal amount of credit for the Sale. Club PA members will be honored with a free Club PA mug, a mark of office which denotes their station.