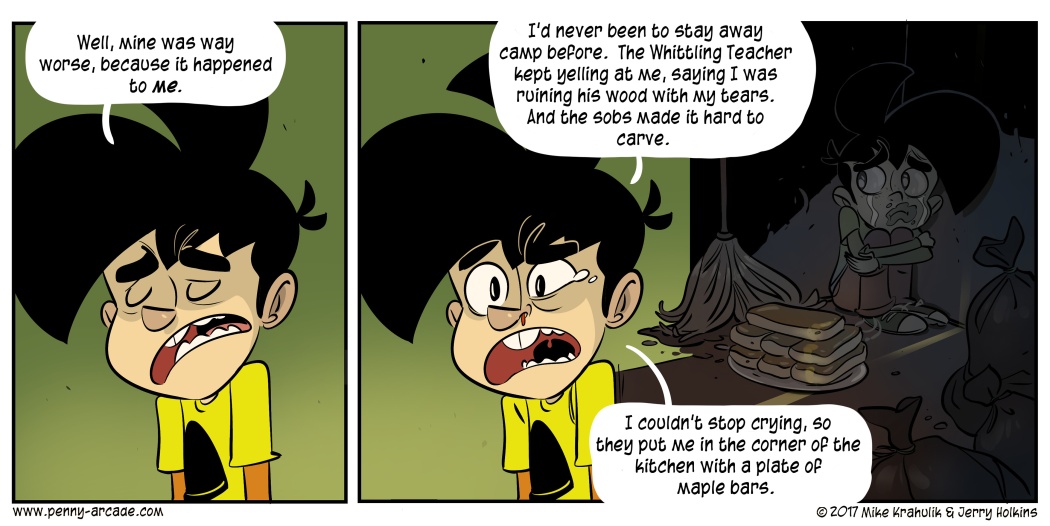 Thus concludes Part 3 of Dumber Camp, unless we uncover some new memory we've suppressed. He tells me this is a true story, and I don't doubt him at all. I don't think they even tried to send him to any more summer camps.

The Mike Krahulik I met in 1993 was a curious combination of unassailable and exposed. You really couldn't get the best of him linguistically. All the people I know who had hard childhoods are hilarious, not as some virtue but as a kind of intuitively generated defense matrix. They're "funny" as a survival mechanism.

When he and I got an apartment, he was so seized with terror that he laid paralyzed in bed. He had fear such that it was indistinguishable from illness. His mom eventually came over to help. I would occasionally play him a song I'd written that he liked, and that seemed to help.

I always thought it was a novel set of properties, but maybe it isn't: the person with a combination of performance capability and crippling social anxiety. A case could be made that I have some measure of the first thing, and some measure of the second thing, but in a more diminished capacity than he does. I'm glad to know him. We need each other to do this.