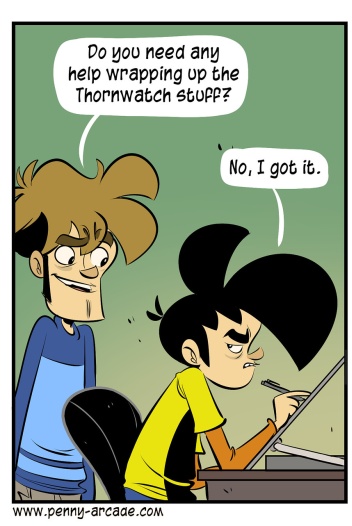 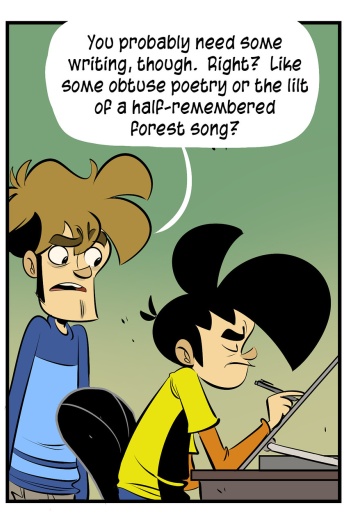 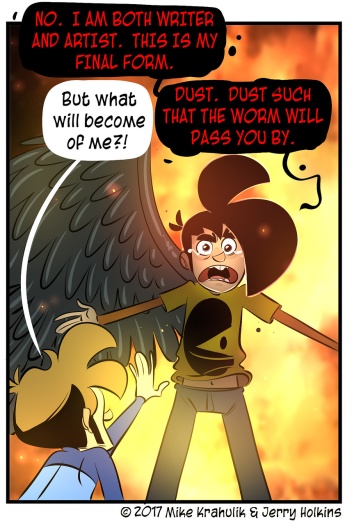 I think there's only two storyboards left until Gabe is done with the expansion to Thornwatch, called The Dark Of The Wood, which is a name I like. He's going so hard on it that he's often writing placeholder text for things to guide himself through a specific artistic stage of production, and a lot of times it's… it's pretty good.

There are many ways to contextualize it. One is that enough of my spores have finally colonized his mind, and he's functioning as a kind of satellite mind that writhes at my subconscious direction. This one is a "maybe." There's another thing it could be, but it requires a story. I might have told it before, but it'll be a more convenient Exhibit A if I deposit it here.

When my sister was young, she called me Bobo exclusively - it's a name I've retained in the erotic clowning community. She started calling me that when she was functionally a baby, so, you know… those were the tools she had at her disposal. Except she was still calling me that when she was six, because she'd heard many, many times that "She couldn't say brother." Initially, she couldn't do it by virtue of her linguistic capacity. Eventually, that just became a truism - people said she "couldn't" say brother so she perceived that she wasn't allowed. And someone else would always do it.

Maybe that's me, in some way? The narrative we tell each other about each other is that together we are one functional creative person, but maybe that's not quite right. I was in a thread of his where he lifted the cloche off some fork-tender strip of prose, and I wrote the following:

This is monstrous, Michael! I'm gonna have to change one or two words and then take all the credit.

The scenario described in the strip is an authentic delight to me. Even in the face of my annihilation I have every faith that I could find some project to occupy my time; there's always some faerie light to chase around. I would love to be the training wheels dad ultimately removes.

We have two authentically bad-ass things hitting the store this afternoon, but I'll bug you about that later. One of them is for your hand! Does that help...?