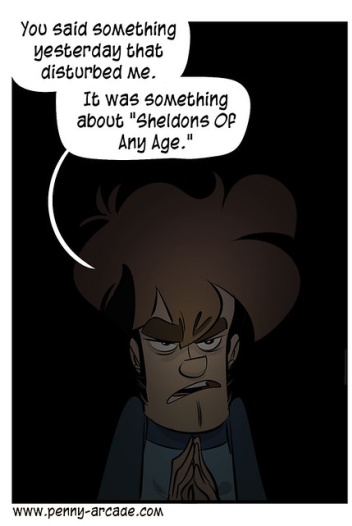 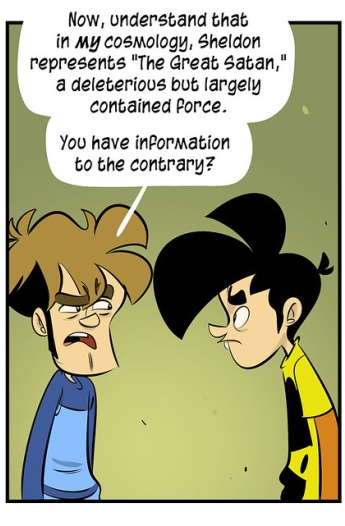 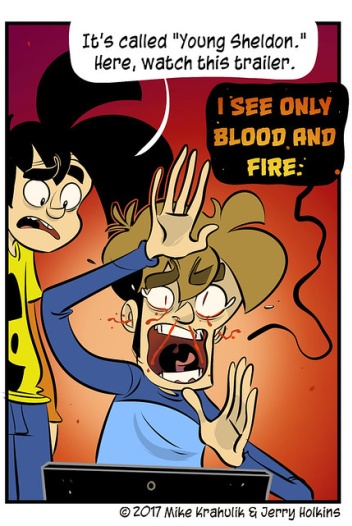 We were still talking about Big Bang Theory after we wrote Friday's Strip, and how my mom likes it because "that's how I am," which is a comment that is abrasive to the surface of the brain.

I can't speak for other people's moms, I can only speak for mine: I think it might be tough for a while if your boy isn't the kind of boy you would use a capital B to describe. One who isn't maybe a one hundred percent on board with the boyly virtues. These are moms who spent a lot of time in terror that their boys were going to get the shit kicked out of them, a fear that manifested in Truth with some regularity. These are brutalities that may not abate until high school is finished, and some of the injuries you sustain you might not even recognize as injuries until you start visiting them on someone else.

For my mom, a show like The Big Bang Theory is such a vindication. She was right; is right, retroactively. The world simply had to catch up to what they already knew: that, if they could survive adolescence, their sons could gain access to the treasures of society even if they didn't do it the right way.

The thing to keep in mind about the young people in your charge is that what you perceive as irony, they perceive as sincerity. So, I'll see something like The Big Bang Theory and think, that's not funny to me. Those are just the people I know performed in such a way as to delight people who don't understand them. My son sees it and thinks hey, there's someone like me, on television, and it's okay for them to be there.

Growing up never stops being difficult.