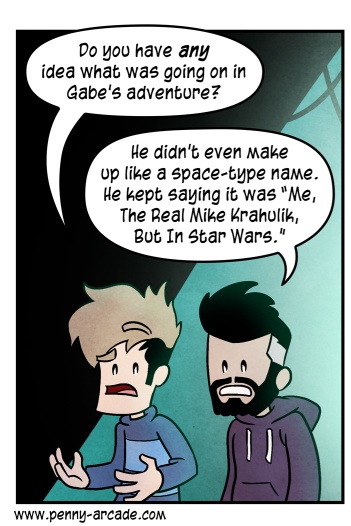 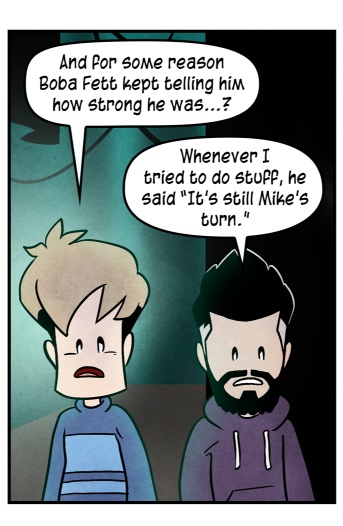 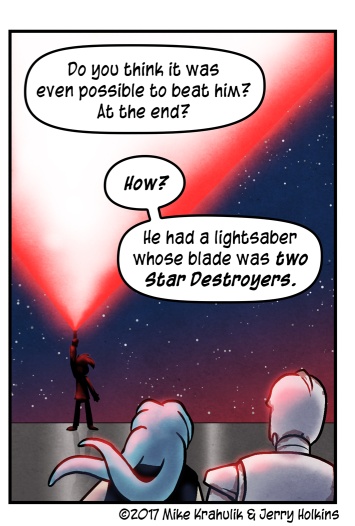 Here's the comic Kris and I put together for the Make A Strip panel on Saturday, which in every way that tracks with my normal life was actually sometime Friday. I couldn't tell you when. I'm getting on a plane here in a second that - once they close the doors on me - is gonna fly for a real, real long time.

I want to thank my friend Krasp for filling in for Mike, as he did years ago. His turn on the stage as the mechanized, jedi-adjacent Kaythree was inspired as well. Generally speaking, if he does something it's good. And if you're wondering, Mike is doing very well. On Saturday he played Super Mario Odyssey all day with Kara in co-op mode then he played Assassin's Creed and then he played Fortnite the rest of the night. It sounds like this precise sequence - one you can use at home - delivers a potent medicinal payload.

It was my great pleasure to spend this time at PAX Aus, with the powerful Enforcer corps and the crew at Penny Arcade holding up the banner. The outpouring of support people gave me to to give Mike was substantial, and as I said to someone at the show I think the knowledge somewhere in his mind that he was among those who would prioritize his health was the thing that allowed him to take action the way he did. There's really not a way for me to fully contain the gratitude I feel for that, to know that I can go halfway around the world and know with certainty that you'll help me take care of my friend.

I've had a few requests on the tweeter about when you might be able to see the new Acquisitions Incorporated stuff - either the game at TwitchCon or the debut of Acquisitions Incorporated: Star Wars. I put links up here in the post, but they're spread out a little bit and people are clearly missing them. Here's the TwitchCon game, Return To Doomgate Inn. It's our Halloween special, and it's only about an hour and a half. It'll be on our regular channels soon, but why wait? And here's the AI: Star Wars, which I've had hundreds of conversations about since we performed it. We gotta figure out a way to keep that story going through the year.