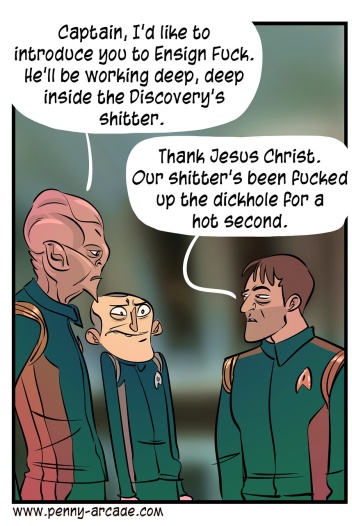 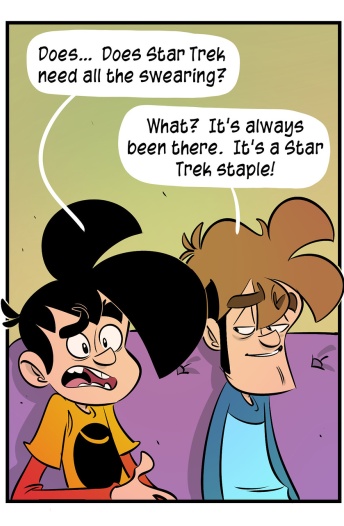 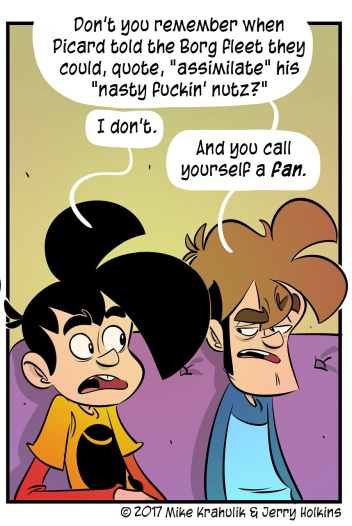 I'm the last one to complain about ostensibly "needless" profanity; I've profited handily by it, and I've employed others, paying them essentially in eff words. It was mostly just surprising to hear it in Star Trek. In case you were not aware, this is not your grandpappy's episodic space navy. Don't believe me? This is how you know a show ferries a mature payload: the characters talk like YouTubers.

I watch it at night, in the dark; I suspect a lot of people watch it with the fam, as Grob does. I don't think it will drive young people to a life of crime or anything. It's just that things which have never happened before are very surprising.

If you don't want to read about shaving, you should go.

I was a fairly devoted acolyte of the Dollar Shave Cult until their handles and blades started breaking comically fast. I certainly saved money over Mach Whatever razors, and that was nice; they also had a funny commercial that I saw enough times for it to lay a cluster of black eggs in my spinal column. But if you're trying to save money, if that's what it's actually about, world class razors are like twenty cents, installed in a handle sturdy enough for one of your children to inherit and then use it their entire lives.

I'd asked online and read around about using a safety razor, which is one step closer to using a straight razor, which I think might be farther than I ever get on this continuum. More than once, I read things suggesting this practice would restore my natural masculine energy. That is a crazy fucking thing to say and it made me angry. I have a bunch of sharp hairs on my face, my daughter doesn't like them, and I need to get them off.

But that's the thing about rituals. Maybe you can't control the weather with them. But if you enunciate the ritual with enough enthusiasm, enough intention, if you have the right props and it's something you do repeatedly... does it change how you think? Because that's really all that's required. That's how dumb the brain is. Hashtag lifehacks.

I use Astra razors because they're considered a solid offering for the novice. I was specifically warned away from Feather, because it's considered an "advanced razor," a classification I wasn't even aware of previously. Motherfuckers online sound like they're talking about Beyblades with this shit, and I'm not that level yet. I don't think I ever will be. And I don't need to be in order to benefit from it.

I have a problem where I avoid looking at my face in the mirror. A video is okay, because it's not "my face" that I'm looking at; it's not my favorite thing to do, but it's at least possible. But I can't not look at my face when I do this. And I can't do it fast. I have to take a few minutes to apply lather and look at my Goddamn face. I have to know about it, which way the hair goes in different parts. I'm forty one, at least I think so, and I didn't know some really fundamental shit about my own face until a month ago. I had to determine that this whole thing - I'm gesturing in a circular way at my chest - was worth knowing about. Worth spending an extra five minutes on. These things have nothing to do with hair removal and yet they're still what I took away.

I got Kiko a razor because he's covered with hair. He was surprised. That I got him a razor, I mean; he knew about the hair. Everybody does. You sort of have to know Kiko pretty well to know when he's surprised, it presents as a micro-adjustment of the iris. He said, with some hesitation, "Are you getting into shaving…?" I don't know. Read the above text. What do you think?