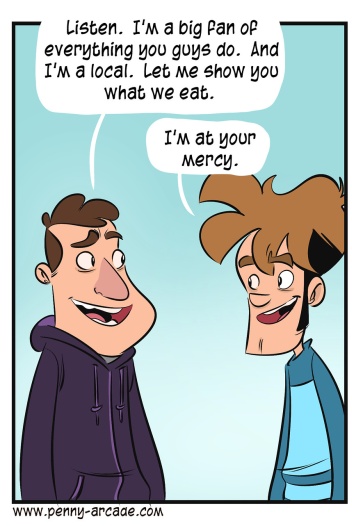 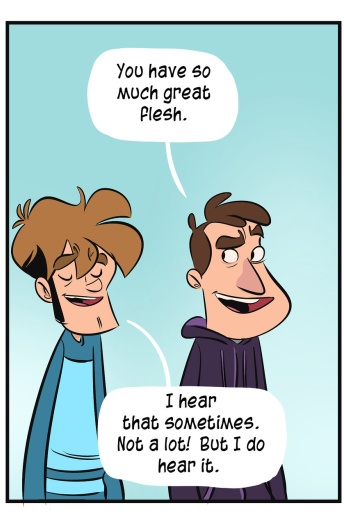 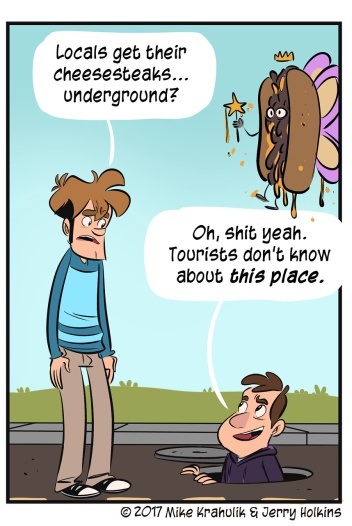 Jesus! I can't fucking get it together today. There is a tremendous amount of subconscious filing going on in the waxy, hive-like substructures of my consciousness and it's interfering with attempts to do anything but lie in bed and watch The Punisher. Is this a recognized condition? Maybe it's new.

It's hard to imagine that, just a couple weeks ago, I was at a supremely delicious PAX Aus and now I'm trying to integrate the entirely new PAX Unplugged into my globetrotting lifestyle. Here's the strip from the Make-A-Strip panel, with a moist new variant on PAX East's "Hot Dog Fairy" that is desperately in need of a paper towel or maybe even just a regular towel.

You aren't supposed to have A Favorite Show of course; I created a nineties style rap beef between the convention formerly known as PAX Prime and PAX East inadvertently. The understanding is usually that whatever the last PAX was is the best PAX, and that's certainly how it feels now - but there's something else going on here too. We learned a lot from Year One, and we're already figuring out how to deliver a 2.0 version of this show that works even better - but, out the gate? You do stuff, and you hope people will come along with you. But… holy shit. This is pretty clearly a thing.

We've got two live games of D&D out of this show for you, both the continuation of the Tomb of Annihilation arc in Acquisitions Incorporated as well as the Acquisitions Incorporated: The "C" Team Holiday Special that I ran for my crew to tide you over until Season 2 starts up. That date was announced at the show: it premieres, completely live, at PAX South and then the adventure continues right here on our own Twitch channel. So… there's, like, six hours of stuff if you want to jump in. I lose my sense of linear time the moment I get up there, but I'm told that these turned out pretty good.

Somebody last night was telling me cheesesteaks are for tourists, and that if you're actually from this shit you get a roast pork sandwich with broccoli rabe, whatever made up shit that is, and provolone. So I'm going to do that. But I feel like it would be wise to hedge with a secondary Whiz Wit lozenge, just for backup. I've learned that the inside pocket of my jacket can hold a sandwich quite well - and that added warmth is a balm for the winter traveler.