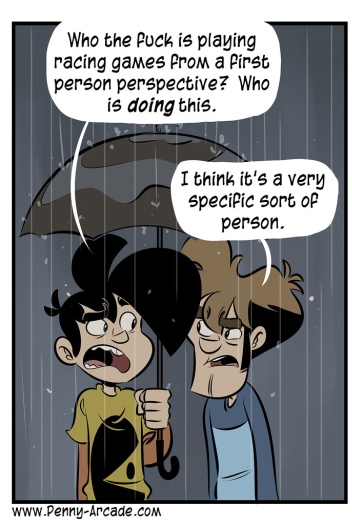 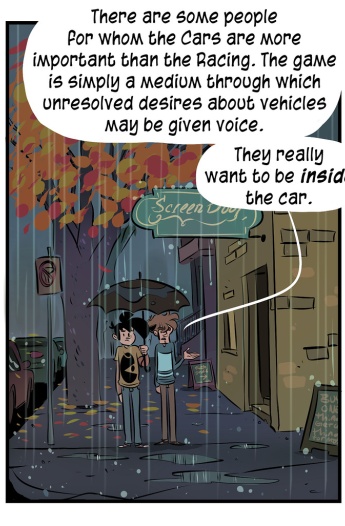 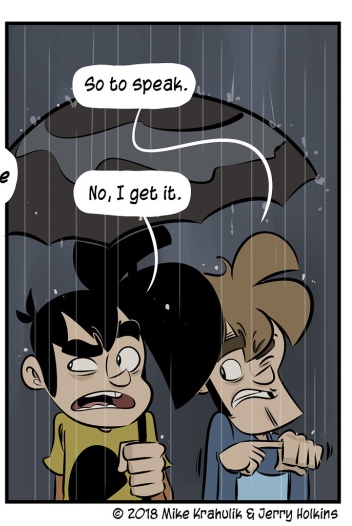 Probably the most relaxing night of gaming I've encountered in recent memory was forming a Convoy - anywhere else but Forza Horizon, it would be called a Squad/Group/Fireteam - and just… driving around. Racing when we felt like it. Doing a seasonal Barn Find when it came up. As a template for winding down the day, it was almost flawless.

I did switch to the interior camera during a race though, completely on accident, which inspired the conversation in the strip. Technically, I asked the question and Gabriel had the answer, but the assertions were the same.

I mean, I used that camera in Test Drive I guess, back on the C64, but that's because it was the only camera. And I will admit that I definitely sit in the cars in Forzvista, the fancy "car-looking-at" mode, because there's no universe in which I'm really going to be seated on the driver's side of an i8. Generally, though, if I'm looking out the window of one of these cars it's because I got too excited braking and pushed the wrong button.

One of the messages I received via my twitterer got way down into the practice in a way that revealed its totality: for him, racers constitute a kind of roleplaying. In this context, they are taking on the role of an up and coming driver in an international automotive festival called Horizon. The game is a tool, essentially, a kind of scaffold you drape the projected identity on. And remotely driving a car from a nearby helicopter, as another interlocutor suggested, not only doesn't satisfy the fantasy requirements it doesn't really make sense. It's already one of my favorite games in recent memory - and the way they're playing it sounds even more… whatever it already is. Hm.