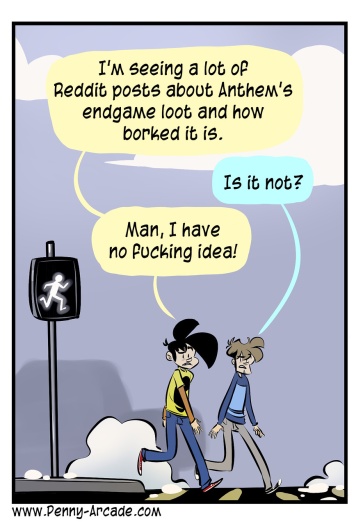 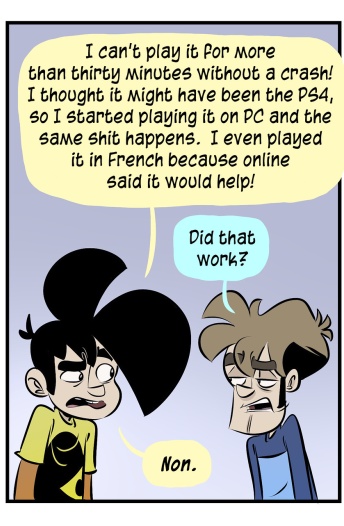 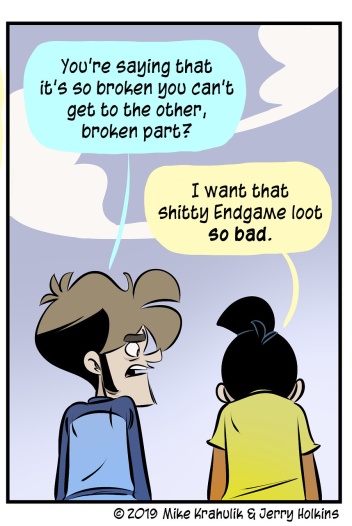 Anthem continues to unfurl its dark fronds, casting doubt on the fortunes of a once legendary house. Such houses generally fall either to dissipation or treachery. I don't know what it would be like to toil on something with the understanding that absolutely everything relied upon it. I can scarcely imagine what it must be like to spend years in the manufacture of my own mausoleum. Who could withstand it? What happens now?

I've really been watching it from afar, putting my time in this interregnum between launches toward Mutant Year Zero, and being richly rewarded for this red-light jaunt into survival tactics fetishism. Someone reminded me that I hadn't gone into it when I said I was gonna, so here I am.

I've only played it for a few hours, set it down, and then came back to it in the lull because it occurred to me I had approached it incorrectly. Similar to XCOM, your primary mode of interaction with the game is to murder people under the most polite conditions possible: to wait, very patiently, while others go ahead. The difference is that these battles take place in a real-time, freely explorable region where you can hit the spacebar at any time and invoke regimented, turn based combat. That by itself is already cool. But there's a stealth aspect there, a sneaking around clearly defined areas of enemy awareness, so that you can progress quite far into places you are not ready for. And this game, just as games of old, doesn't give a fuck if you aren't ready.

Oh, and depending on your difficulty level, you don't heal after fights. That's why you aren't getting your HP topped up, because you don't. Ha! Ha, ha! Yeah.

So, imagine that you are playing a kind of Rubik's Cube that has a kind of barb or tooth in it, and when you twist the cube with insufficient attention or reverence it enters your flesh to remind you. Because my characters were not powerful, and I was surrounded by psychic jerks and mean dogs, I couldn't figure out how to move forward. It stopped me altogether.

I ended up back in there a couple days ago, desperate for something to lend meaning to the late hours of the evening, when it occurred to me that… well, yeah, I can't fight like a whole mutant church or something. Sure. But this asshole here wanders way, way out of earshot doesn't he. Far enough for me to deliver two silent shots and then knock him over in case I needed another round. At this point it became something like Sudoku - moving from knowledge to knowledge, revealing success one bite at a time, until last night when before I'd fully realized what was happening the fundamentally ill-starred fights I was terrified of were just… regular fights. Not easy; recall that I was trying to make the best of 3v1 fights theoretically in my favor before and occasionally coming up short. Tactics and puzzles are sort of commingled in this really weird, actually quite special game into something that feels new.