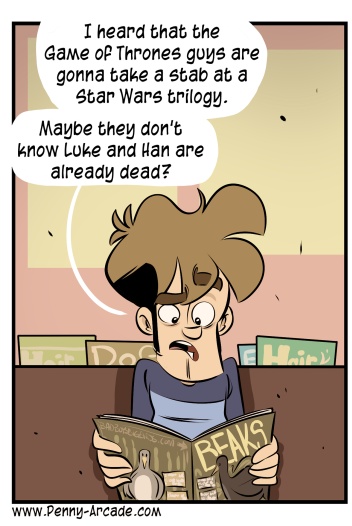 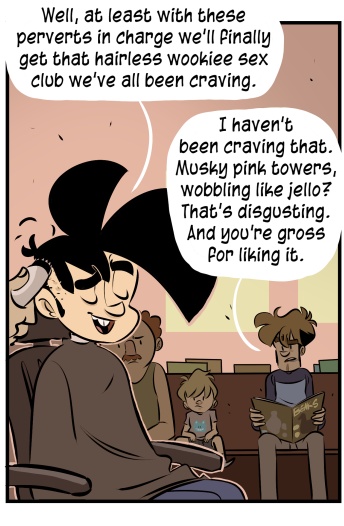 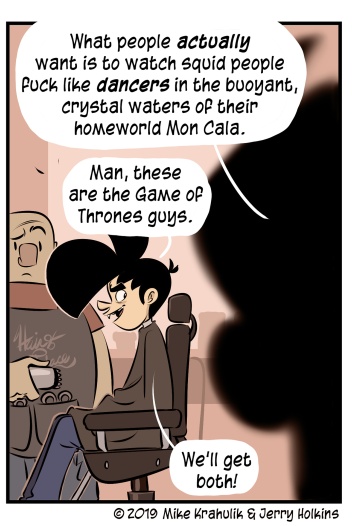 Giving Star Wars to the Game Of Thrones people is a fascinating choice, particularly as these creators grow more spent and villainous in perception with every passing episode. I would have given it to Deadwood's David Milch, but that's just me. As Star Wars is largely about Lineage, of course, Carnivale's Daniel Knauf would also work. I mean, while we're giving it to HBO people. What we need in truth is an HBO Star Wars series, not another Trilogy. But anyway.

Watching Game of Thrones, as a fandom, as a narrative, and as a cultural product literally and figuratively burn brings me precisely zero pleasure. I was already out, and intersected with it only to satisfy long held curiosities, but at this point I'm seeing reactions from people who had perhaps forgotten that Daenerys' last name is Targaryen.

If I were Geor.r.ge, I'd take this opportunity to observe all this data, perhaps an unprecedented amount of Market Research, and throw the rudder hard to port in my writing. I was talking in the channel about this during one of our art streams, and people made fun of me, suggesting that I was positing something like creation by Committee. This is… silly, for many reasons, and it might be worth going into this for a second.

First, every comic on this website - with the exception of perhaps three - was "made by committee." If you mean to say that the creative work of more than one person is suspect, you're wrong. If you mean to say that group work can lack clarity, it's possible; but I'd suggest you look at my own work here in the space for evidence that singular creators can be just as fractional, diffuse, and opaque as any group. Particularly in comedy television, the "writer's room" is a recognized phenomenon. Judge work by work. There's a lot of mysticism that surrounds the Creator as God-Touched Chrysalis, and certainly I've met people who have made me believe this, but it's not true. Writing is a subspecies of lying, and its practitioners are not models for emulation.

Second, it's really what you do with this information that would result in the anodyne, wind-tunnel content we assert when we deploy a term that ends with "...by Committee." Such a wealth of feeling, expressed across a species, offers an opportunity to create something that navigates expectations almost nautically. It was all built up to burn it down; the pyre was heaped with every chapter. But there's a startling path through this that only the collated, unconscious analysis of millions of people can calculate. Only a fool would disregard treasure like this.