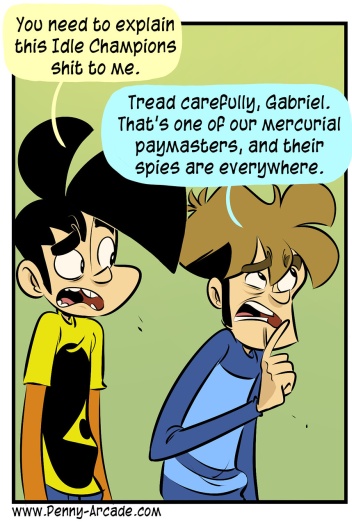 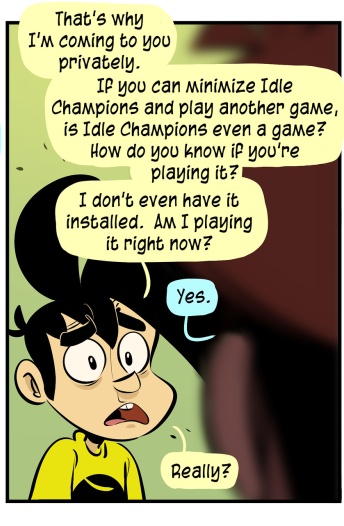 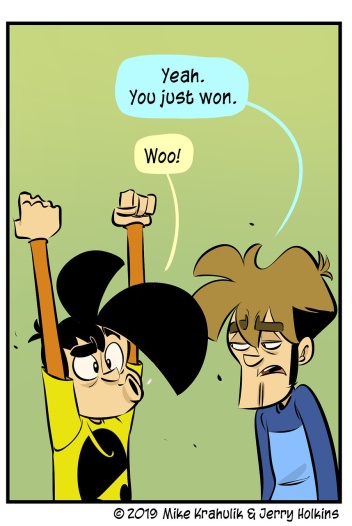 We have I guess what is called an "integration" or, legally, a "sponsorship" with Idle Champions Of The Forgotten Realms from Codename Entertainment. Essentially people can complete Omin's quests in Idle Champs, and they can shift events in the stream game. If I was gonna do something like this, I wanted it (a) to matter and (b) not be too unctuous; I think we managed to chart a good course.

It also allowed us to return to a classic Penny Arcade pastime, that of kicking sponsors directly in the mouth. I can already feel my youthful vigor return!

I like clickers, or Idle Games as they are sometimes called, though I'm not sure if we've decided on a robust cosmology for what determines what in this space. Many of them are dense with hidden avenues, secret routes cobbled with dark purpose, and if that's happening in this one I don't know. Most clickers are far more abstract than this one, even graphics are considered a luxury by genre standards, and where others might even have very long term "stories" that flow from their ongoing mechanical revelations, this one is something like a slide puzzle where the tiles of the puzzle are D&D Paragons and the game is about establishing a metaball of effective synergies and then letting it grind mobs while you do something else. We did a stream for it once, and I was surprised to learn that just leaving it running is a norm for players. In truth, I've seen it running on Amy's computer while she's playing Walnut at the table. Shit gets pretty meta around here.

But that's so far outside the boundaries of what Gabe even considers a game that it inspired a conversation we just turned into a strip. Also! An inside joke of ours is "Punch it with 'woo!' and we're golden," which is another way of saying "I am no longer interested in the creative process and am, in fact, far more interested in having lunch" but we found a strip where it actually feels like the right play(!!!).

Having resolved our differences, Gabriel and I will now commune through the dialectic of monster dismemberment. Catch us streaming Dauntless

from 2-4pm PDT this afternoon to see what happens when we stop being polite to behemoths… and start getting real.