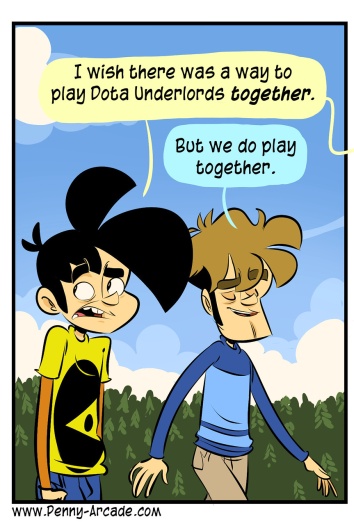 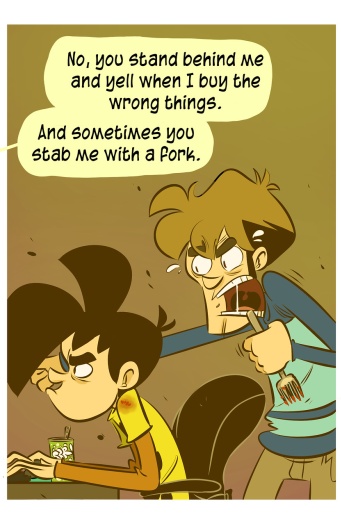 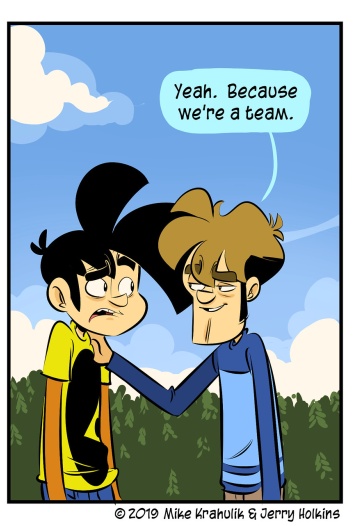 Coming to grips with what Dota Urnderlerds (and by that token the Auto genre in general) represents is a fucking trip. I think we have been wrong on virtually every point fully twice over. Luckily, I have been there at every step to adjust Michael, to perfect him, like an orthodontist for the towers of his brain.

The strip is wholly unconnected to reality, for once, just to provide a novel texture: Gabriel has gone hard enough to seek out the information and then provided it to me via SMS, he is the smart one, and even though I can't see him when we communicate in this way I know that his eyes have gone wide and he is performing a kind of exaggerated shrug. My friend Ryan Spain, who plays MTG: Arena on Twitch under the moniker "GoingOptimal" and who offers one of the most legible Magic streams available today, tried to communicate some of this to me years ago but it's so counterintuitive to the layman that it causes pain to process it:

Health is just another resource.

I don't even like typing it, but it's quite true. Especially early on, in either game, the kind of damage you're going to be taking has no bearing on anything. Going Optimal in Underlords can mean, I'm being told, not fielding units to guarantee a loss. It can mean breaking the synergy you were so devoted to five rounds ago. It can mean buying every unit in the auction, all of it, just to maximize your options. Primarily, it means playing the game in front of you as opposed to the fantasized game you wanted to play, or attempting to recreate troop by troop some previous round you fared well in. Because you can sell back for full price, a lot of what we've learned about what constitutes a Good Choice doesn't even apply. This is what it's like when a new genre is born, this feeling, the sense of new track being laid in the mind.