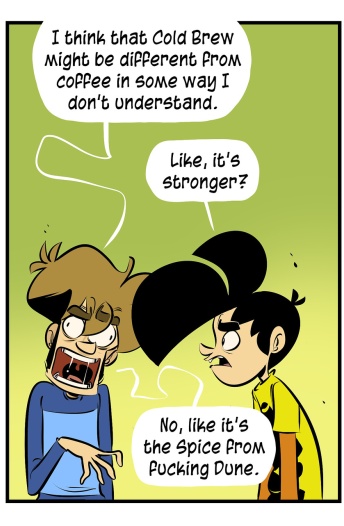 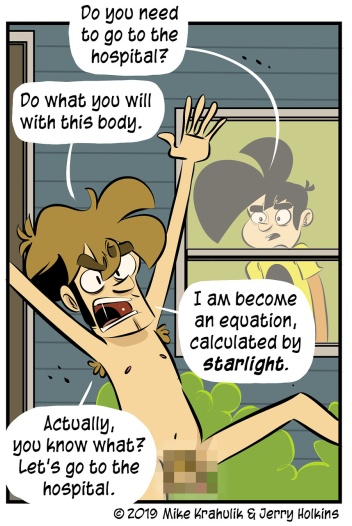 I don't talk about it a lot, I should talk about it more, but we do a brewing show the vast, vast majority of Tuesdays on Twitch called Acquisitions Intoxicated. There's like seventy two fucking episodes of this shit! We even have a collaboration between #AcqInt and Two Beers Brewing hitting later this month that should hopefully still be around when PAX West rolls around - every beer we craft with the channel and subsequently brew has a narrative tied into Acquisitions incorporated or D&D in general, and this one is called Signing Bonus. I can't wait for you to see the label, and maybe even the promotional poster.

We brew an in an appliance called a PicoBrew, which I backed on Kickstarter a million years ago. The sequel to the device, the PicoBrew Z, can be used to make other kinds of beverages, and one of them is cold brew. Since I'm a home roaster in an effort to be Seattle as fuck it was an easy matter to toss in a couple pounds of home roast and then have the device give me back four fucking gallons of coffee. Which, in an effort to be even more Seattle than I was previously, I put on a Nitro Tap. This is all covered in the previous strip. But that was written before, just to make a joke at my expense. I hadn't actually had any of it.

Let me put it this way: it's a sacrament for a religion that won't be founded for another hundred years. Even so, I've wept in its orbital cathedral. That's the mindcasting power of this malevolent, wholly sentient fluid.

Penny Arcade's precious son Ryan Hartman goes now to prepare a place for you, specifically PAX West, so I will take this opportunity - like I take every opportunity - to play Dunderlords. The party will be open, and we can usually get in three solid games from 2-4:30pm PDT or so. Come test your mettle!