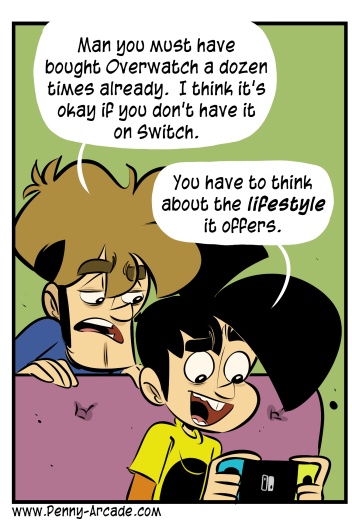 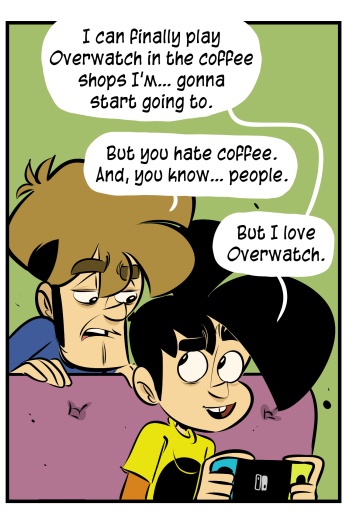 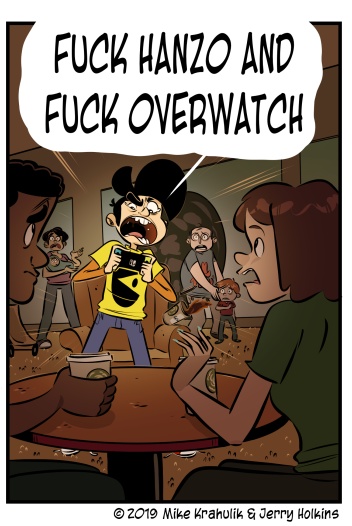 Overwatch is moving into Skyrimmian territory, a creature made manifest in all places at all times, a star-sign reckoning that a platform has come of age. I feel like there's places Overwatch may not be appropriate or maybe there's people for whom Overwatch reveals gruesome psychic fault lines which you sorta have to keep an eye on. But if this proliferation is gonna continue, they need to get on Single Sign-In like fuckin' yesterday.

The greatest strength of the Switch isn't its ability to morph from home console to portable. Maybe that got them in the door, a twist like the ones they've consistently delivered on the hardware side; a narrative. But that hasn't been true for a while, and the Lite is a good index of that - that's just a cool, mostly out of the way thing it knows how to do, like a comprehensive knowledge of sailing knots or something. The Switch has the best digital store Nintendo has ever offered, and people actually buy games on it, which means everybody wants to be there - and slowly but surely, they are. Their outreach, unerring in its Gunn-tier taste level, is profound. When I see a game launching on PC and the Switch, the Switch, it's pretty clear some fracture in the old order is snaking its way up the wall. The hardware is enough, with some affection, to be a vessel for some pretty big ticket PC stuff while being an almost flawless container for today's raft of indie kink. I am no console stalwart by any means, but it's easily my favorite excursion into the form and I'd be truly surprised if that weren't a common sentiment. Plus it's got that goose.

I don't think it's PAX related because it took so long to materialize, but I'm sick for fucking real. This means that I won't be able to play River City Girls with them on stream, a turn of events I have dubbed "The Sadness Engine."