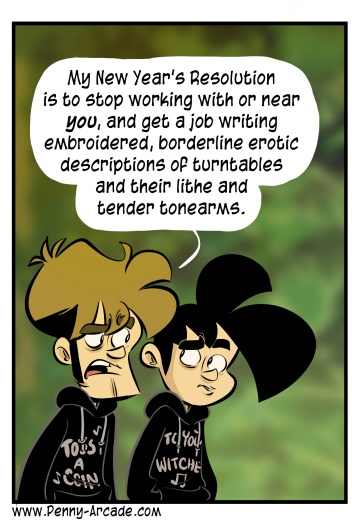 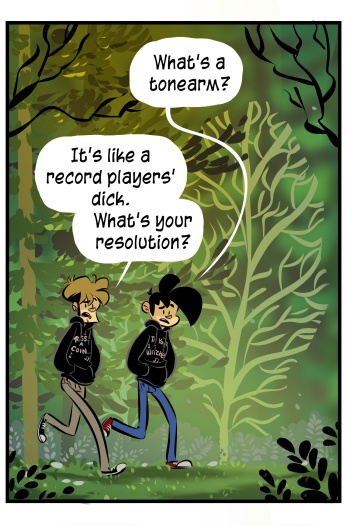 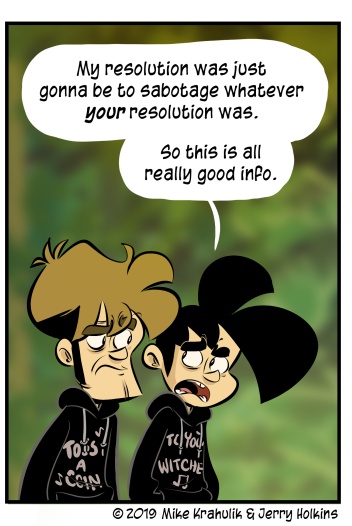 I want to listen to records for some reason. I don't know why. Well… hm.

I guess one of the more Me things there is might be to figure out how to distill an activity into hard liquor. Transform it into a Satanic ritual. Like… eat its face, or something. Currently, Listening To Music involves typing its name into something, the way an inscrutable Wise Man might whisper into a well, and then the sum total of audio output through history is yoked for my use and pleasure. That's Listening To Music. Listening to records, by comparison, is engaging firmly with the universe.  It's a word that in all probability ends in mancy.

It's not something we had growing up or anything; we never had a record player in the house. "Dad" didn't have some "record collection" that I "wasn't allowed to touch" and so now I need to "touch Dad's records" at a ten times multiple costwise. If I were trying to recreate that state, it would be a fucking 8-Track of all things. If there is a widespread clamoring to return to that particular device, I sure as shit don't know about it. I can imagine the ancient magnetic tape being tender and chewy enough to stretch on a taffy puller; I can see it trailing golden cords when you tug the cartridge out of the machine, like a Caramello.

I asked online, in a thread you might find useful yourself, about where to start on this kind of thing and I got answers of the high quality (and the appropriate level of teasing) I expect from my subset of humanity. But then I fell into a rabbit hole of avant garde, minimalist designs, and extortionate cost which indicated that I'd gone too far and might not make it back. They started talking about belts and Solid Wood Plinths and I wanted to cut these words, this language, and make a home out of it so I could live inside.

I'm gonna head over to Gabe's today, try to get some models on the table, but at 2pm we're gonna stream the next chapter or two of Darksiders Genesis. We're really enjoyed it so far, and we were surprised to learn we were only a third or so of the way through.