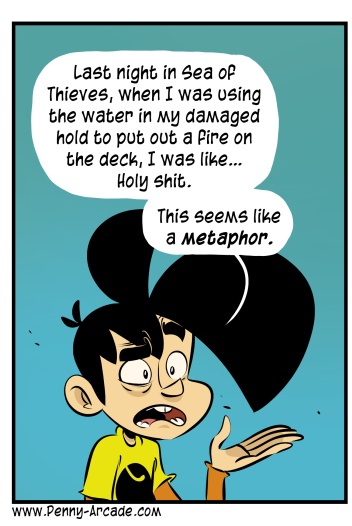 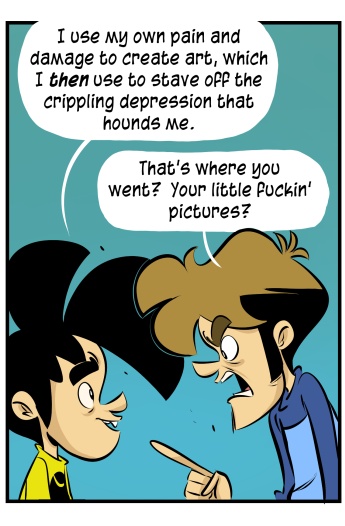 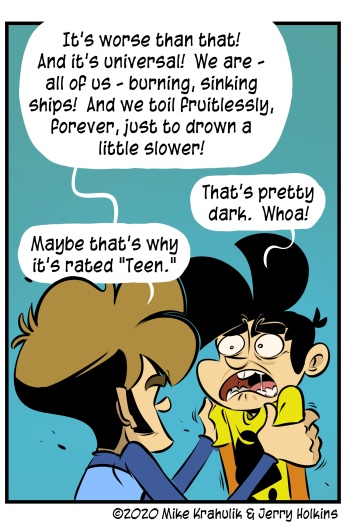 Sea of Thieves is still out here thievin' it up, doing all that thief stuff. It remains cool in a way that has an almost mystical capacity to evade review. There is a capoeira aspect to this: it shifts effortlessly into the social space, away from analysis, whenever you try to identify it. Then, when you try and seek it out purely as a social practice, it's like trying to fold water in half. One generates the other while containing it and being contained by it. And the "gameplay" is grounded in such natural principles that it often just… disappears. I consider that capacity to effervesce an index of its craft and genius.

Gabriel and his pulsing brood just got back in, so they hadn't seen the fire stuff, and it's one of the neatest executions of the concept I've seen. But it also made him have thoughts and feelings, which - I think we can all agree - are generally to be avoided.

You may be surprised to learn that there is another PAX coming up. "But Mr. Horkrims," you say, "Didn't you literally just fucking GET BACK" from PAX a week ago?" to which I reply "Ahhh!" because my obligations have achieved physical density and are, like an evil hat, crushing me down. These are jokes! I'm actually super excited and Brenna's coming out this time and it's rad. I'm gonna go to all my places I like to go to and see all my cool people and I'm gonna play in the Acquisitions Incorporated Game Mike is running and I'm also gonna run my own game. It's all in the schedule! Except for the lobster roll eating "festival," more of a personal quest, which you may assume occurs throughout.

Where the PAX 10 at South focuses on tabletop excursions, the one at East homes in on Mobile, which I have modified to include games developed and played on The Switch because I go to a lot of shows things and I see those everywhere. Plus, if it weren't a mobile platform, how would Jasper Dolphin have been able to bring it on stage at the Grammys? Right? Right. Here's the stuff we thought you should see:

Check them out at the show! Or, like… right now.