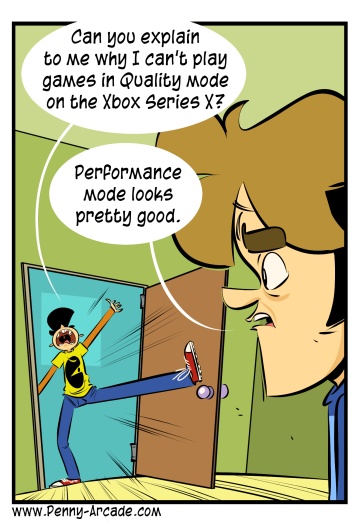 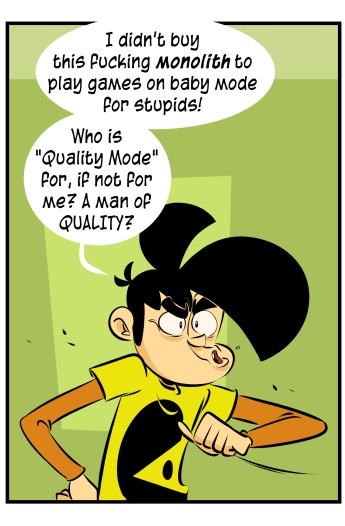 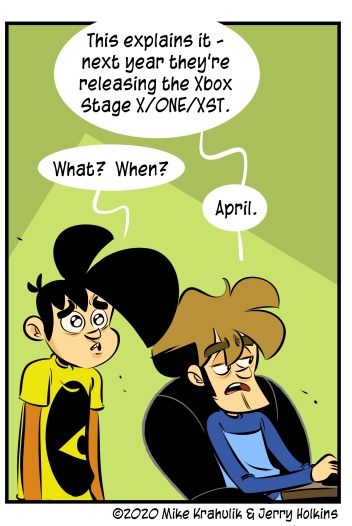 When they want to craft another ambiguous Xbox platform, they should consider the nomenclature we deploy in today's strip - although from the sounds of it, there's just some performance weirdness generally on the new equipment. It's not a hundred percent clear depending on the game what's going on sometimes with the new hardware, and I have a ton of questions about it, because on paper these the new flagship systems are the sort of dragons you might find casually gnawing on the roots of Yggdrasil. I can't stress enough: I would have used that reference even if we weren't talking about the new AC.

I really like Digital Foundry for this kind of stuff, if you feel like you want to lose some time to this today. They have a video showing some of the novel alterations in the new Valhalla patch on both systems, along with a thing that looks like a framerate stutter in cinematic cameras that only seems to exist on the Xbox - and the PC? Huh. This is more granular than my own rigorous technical assessment, which is "its borked lol." I generally feel smarter about a topic after I see one of their videos, which is increasingly rare upon the face of this haunted web.

(We've been filming all day, and it was more exhausting than usual.  I will use the paragraph here about Gabir Motors NEXT WEEK when we should have some cool announcements to that effect!  For today, I will swing into the same 4pm PDT slot with a mixture of Fuser and Kind Words probably because of who I am as a person.)