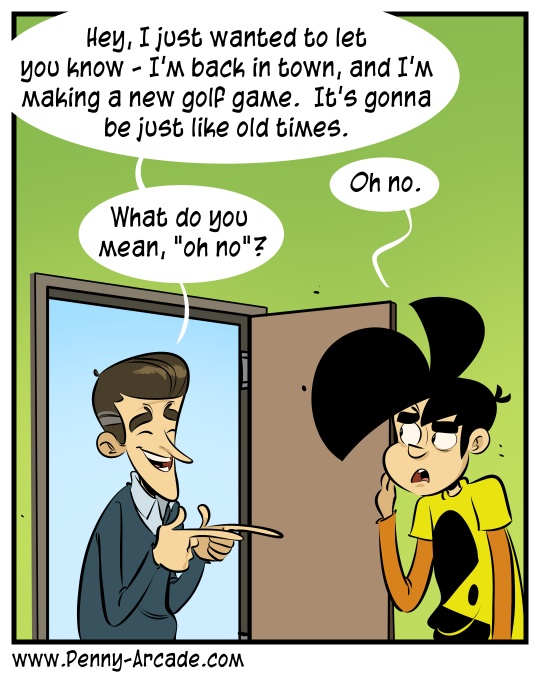 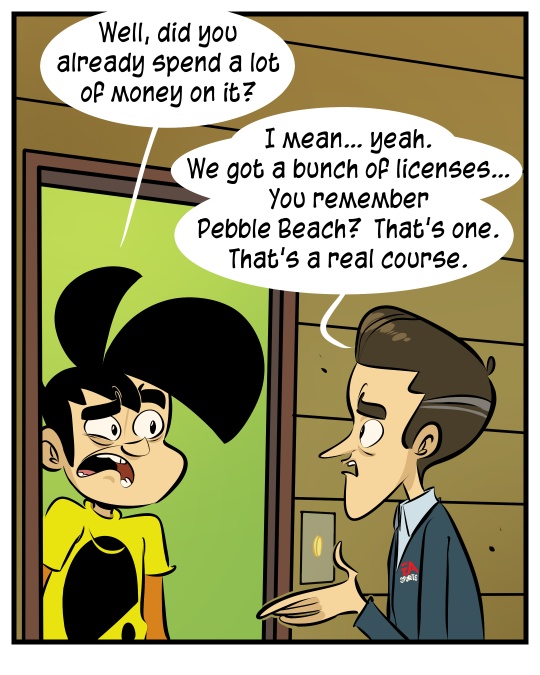 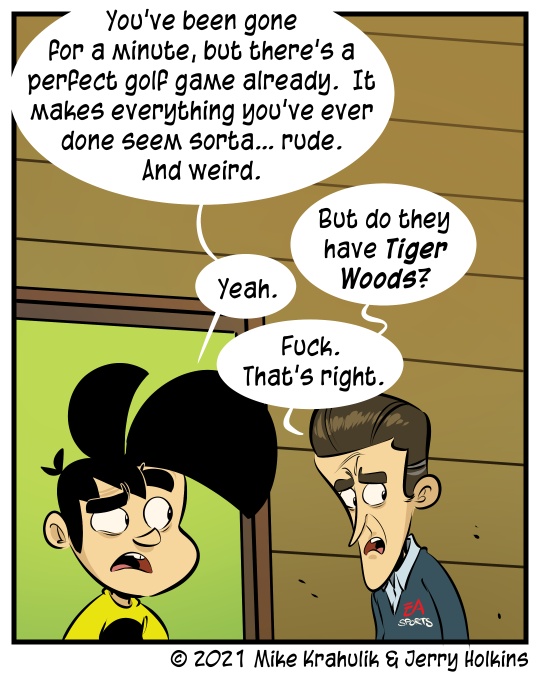 EA wants back into simulated golf but I guess I don't care.

I mean… here's the thing. Reviews of PGA Tour 2k1 are generally like "The golf is good, but everything around it isn't super polished." On balance, I think I probably agree with that. I have played the game for a hundred hours, and I was never especially attracted to their career or MyPlayer customization. Where it excels is in the simulation of Golf. This, combined with the course creator and a community that has mastered its use, mean that the main problem they are gonna have is getting me to buy the game again as an annual thing. It's too good.  I bought the season pass because I wanted to give them more money. That's how well treated I feel by a game that cares about Golf first, whose value has increased sharply since I bought it seven months ago.

We stopped buying EA Golf games a while ago, for a couple reasons. After being unable to play their games online at launch two years in a row, we decided that it should mean something when a company does that. I didn't think the business model at the time worked especially well for Golf, either; they were essentially RPGs you had to grind through every year, and new courses essentially operated like Level Packs in a shooter. These two things together made the purchase fraught. What I expect from a new EA attempt is gruesome monetization, a fundamental misunderstanding about what constitutes value for the player, and stellar player models. But the thinking around how you engage users with a year of content between official releases has changed a lot since they were last at it. I can think of ways that they might ameliorate things like this, but I don't see any scenario where their return doesn't also improve the other game - the one I actually want to play. Hopefully the 2K acquisition of HB Studios signals a capacity - or at least an interest - in the kind of warfare an Electronic Arts can wage.

Our last match against Gary Whitta and his weeping chancre Nominal Will Smith had to end early - with us four holes up, and only four left to go. There's a scenario - so distant it would require an orbital telescope to discern, but possible - that they could have tied the game by the end. But because we were unable to pull them out root and stem, they have grown bold in the interim - eating two Go-GURTs at once, or cruelly scourging their vassals with tangy lengths of Fruit by the Foot. We will put a stop to these heinous acts and others this afternoon at 2pm PDT sur le Tweetch.