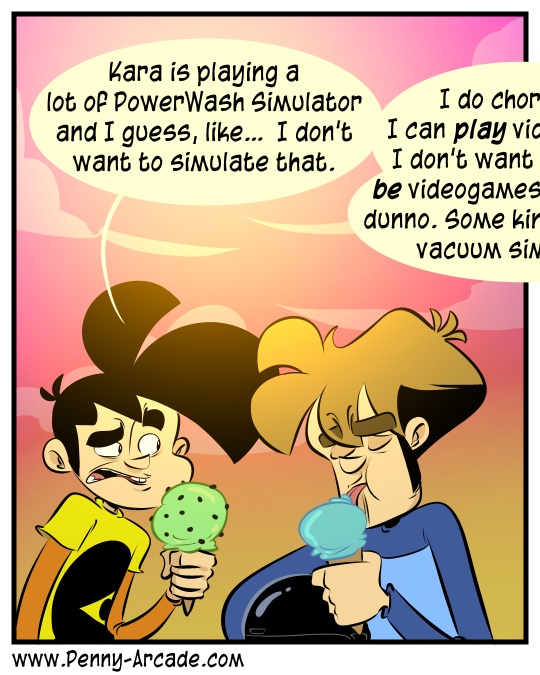 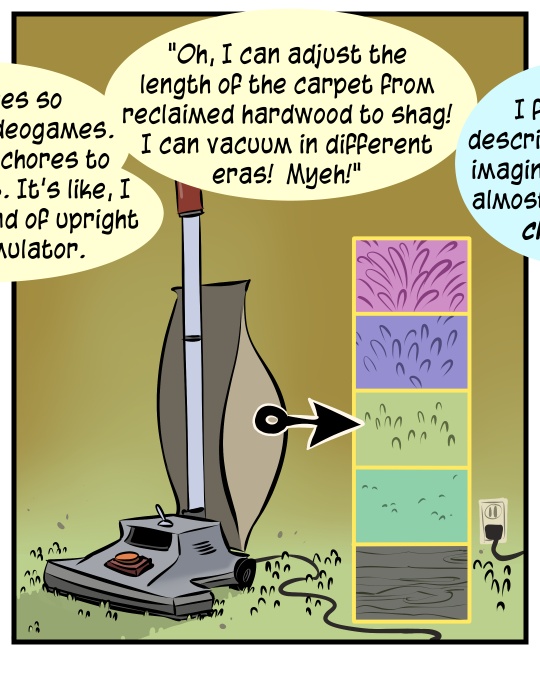 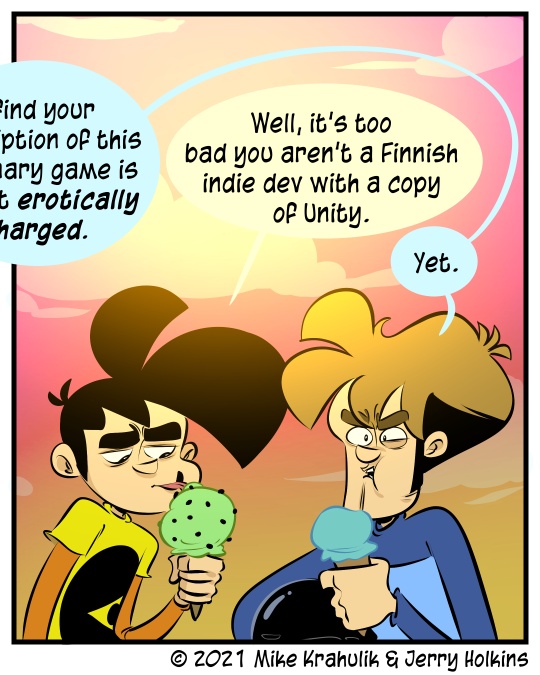 I would say that a weird amount of the games I get truly obsessed with come from Scandinavian countries. Or, Nordic countries. Either the usage changed, or it's regional in nature. In any case, I trust in their intrepid spirit and proven capacity to get my Vacuum Battle Royale game off the ground. Get in touch. And I know you're wondering - Vacuum Battle Royale? How would that work? Here's the secret: the carpets are dirtier than usual.  And the house is very large.

Oh, and PowerWash Simulator is actually really cool, just like it says on the tin. It's like Q-bert in reverse. Plus, this is a great way to power wash things without putting a jet of water straight through your hand. The genius of their execution, and you'll see this when you play, is that they have settled on exactly the right amount of work for something to be cleaned. It's never so onerous that it's a pain in the ass, but you aren't getting away with shit either. It's perfect. I'd love to see it become an eSport, like Farming Simulator.

You might have seen the Pride game for Acquisitions Incorporated: The "C" Team, run by the inimitable Kate Welch, announced on Twitter. If not, I will bring Twitter in here:

All proceeds made during the stream will support Lambert House, a center that empowers lesbian, gay, bisexual, transgender, and questioning youth through developing leadership, social, and life skills. Learn more about their work at https://t.co/zO6KpQra8y.

You can also support Lambert House with the Pinny Arcade Pride Set at https://t.co/zwTRxtWY6G, where we've already raised a total of $15,917!! Let's continue the momentum. Be sure not to miss the #Cteam adventure and a host of exciting giveaways from @ElderwoodBoxes & @Wizards!

Gavin designed a pin set a couple years ago to support Lambert House up on Cap Hill - my sister spent time at Odyssey in Spokane, which seems to cover some of the same ground. In any case, we had to reorder that set because you bought them all. So far that project has delivered $15,917.40 to Lambert House, and any money that comes in during the stream will go to the same place. Your Shadow Chancellor Elyssa worked hard to build this game - it's got a great cast, a good mix of new and old, and I think you'll be pleased with it come June 9th.

If you were wondering, yes is is time for the next live episode of Motorsport Manager. After a disastrous experiment with parts the week before, we learned that putting a great car underneath Sri Lankan superstar Enriqua Lara - known to her fans as The Laraithan - put the organization on the podium. With points in the bag and Chairperson Bo Chonglin sated for now, social media is abuzz about the potential of our new Factory to be a real differentiator on course. Join us in the Pit Crew at 2pm PDT and marvel with us that this is all imaginary yet also real, somehow.