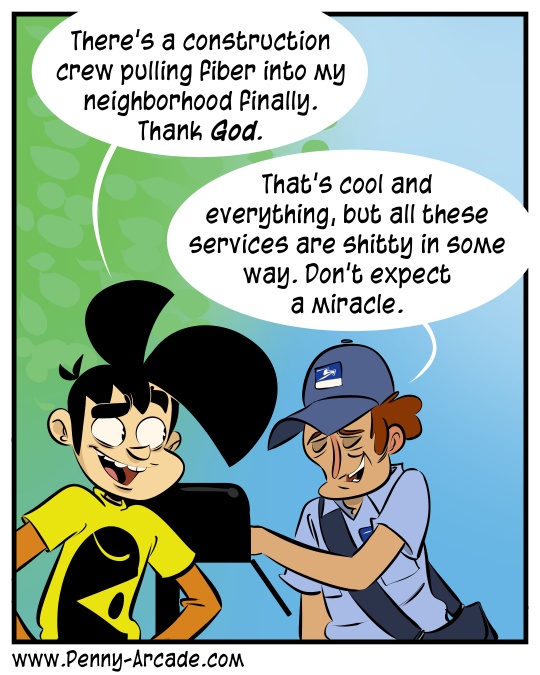 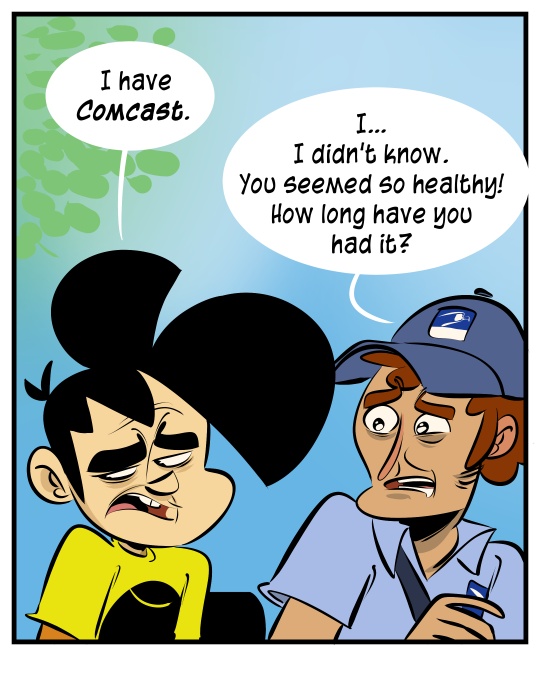 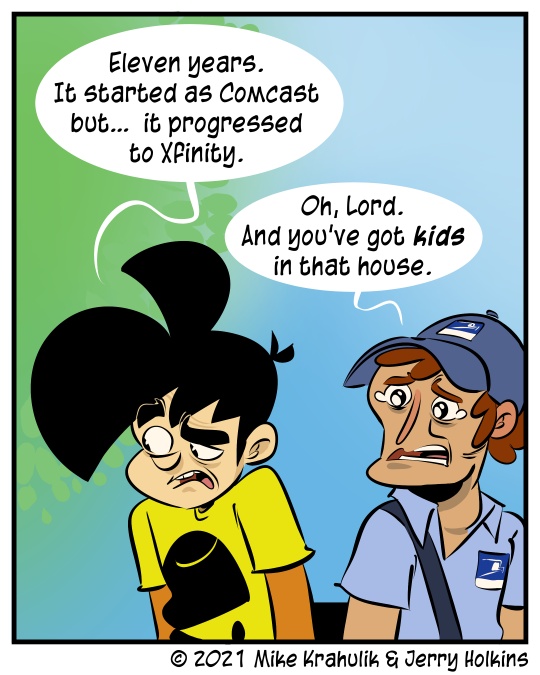 I think that Gabe had just enough internet before The Plague Year, but when more of life moved online bits got pretty thin on the ground. What he has now, despite what might appear on the bill, is unlike traditional Internet access a substantial percentage of the time. But it's Comcast, and that's who sells Web over there! At least, currently. He just saw a Ziply truck, and I don't have a lot of experience with Ziply other than I guess I thought we were done naming companies like adverbs, but okay.

I've occasionally had issues with my fiber, but when it works, it's still Fiber. I think it's similar in some ways to the idea that there is no such thing as bad Pizza. I've had two serious problems with Centurylink, which is maybe lucky, but in each instance I called and they fixed it. You can't take this kind of thing out on the person you call - arguably, they're more abused by the upper echelons of their company than you ever could be. They are working there because they need money and health insurance. So when the company was trying to charge me for a service they no longer even offered, I called up and said hey, I'm not, like mad or anything. Anger is a profound energy expenditure I reserve for situations that actually call for it, things of cosmic import, like patch notes that lack specificity. So, again, I'm not mad but I won't pay for something that I didn't use and, indeed, could not possibly have used. I could feel the car of our conversation switching tracks to another part of the script, there was very nearly an audible clunk, to the Retention portion, even though I was just trying to remove incorrect charges, and I think the service is pretty good generally! She cut my bill in half and upgraded the line from 100mbit to Gigabit fiber.

I guess I'd say that was the moral of the story, to be cool, but who knows. Could it have been Hera on the line? Is the modern version of the myth that she works phone support as opposed to being cloak'd in the guise of an old woman on a riverbank? In a world where the Market is God, maybe that tracks.

It didn't take very long for Splitgate to become a hot cauldron of bathing devils, of monstrous creatures who detest beauty. Gabriel sent me this video in the night, and it details a ritual by which the player can become a teleporting goblin for whom space itself is a joke, forever peeking - and killing - from their 8th dimensional warrens:

Brad, I'm not practicing this five minutes a day. I'm going to play Splitgate until an unacceptable percentage of the servers are dominated by warlocks and then I'm gonna scuttle sideways into the Doom-inspired Roguelite Jupiter Hell.