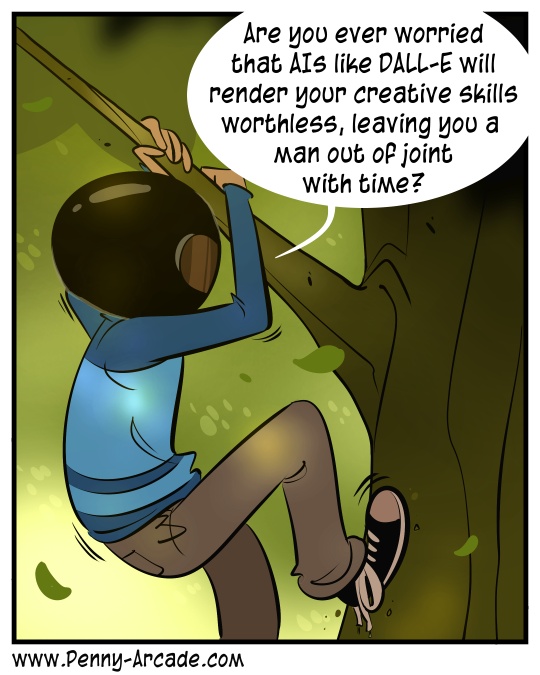 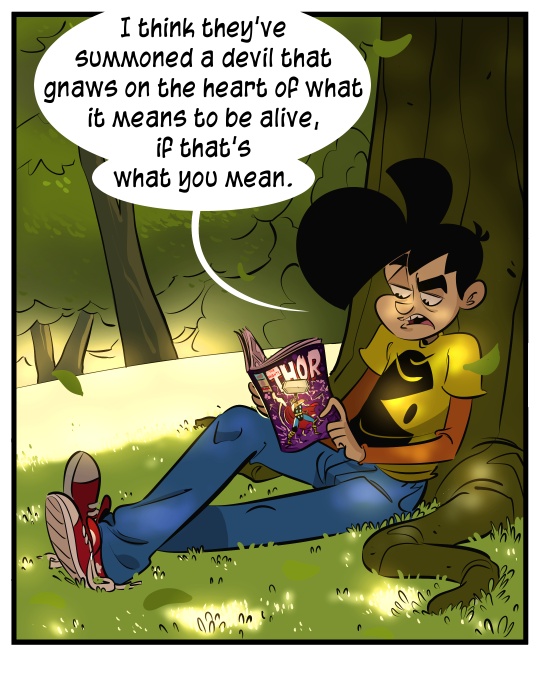 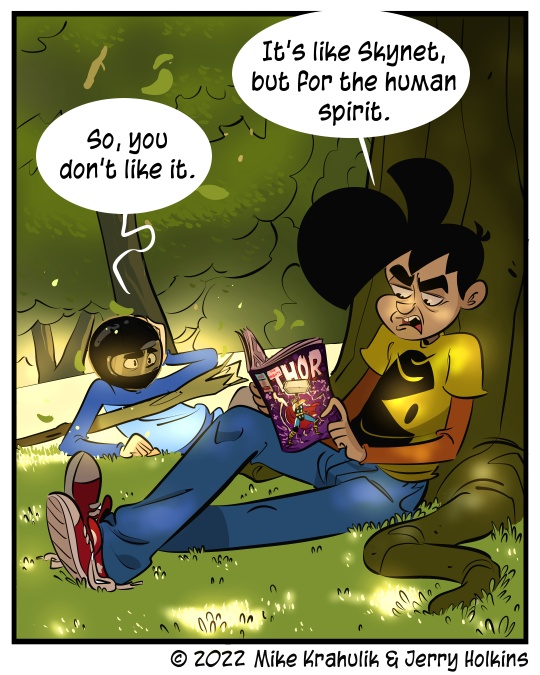 I was looking at a very long thread of Kermit the Frogs, or… maybe Kermits the Frog, les grenouilles, and they had all been generated by DALL-E 2 to place the titular amphibian in a variety of films. They looked pretty fucking good. I asked Gabe what he thought about this type of shit, he had a lot of thoughts, and we ended up talking for about an hour.

If you have any misgivings about a new thing, what people like to do is post an image from The Simpsons. It's not clear why, but the rhetorical substrate here is that new things are automatically good. I think having a wholly reflexive distrust of novelty won't serve you, but arguably I lean toward novelty and I waste a lot of time trying to baleen nutrition out of it. You can only maintain these ironic "No, it's the children who are wrong" poses if you don't spend very much time around children. They're wrong all the fucking time, because they're human beings. Youth, like age, can inflect this folly but we are imperfect creatures doomed to live and die in the Earth's last days. Try to have some sympathy for each other.

I've seen a lot of slippery slopes, is what I'm saying. It's been my experience that dry, easily navigable slopes are the exception. There must be folk tales that warn against this phenomenon, the very specific type of Looking Glass we have invented, that convincingly purports to tell the future but actually just knows everything up to that point. Knowledge of "the" future is actually knowledge of "a" future, the map is not the territory, etc.

I think there'll be jobs for artists to polish the work the AI spits out, and a caste of Whisperers to extract more fit work from the systems, various forms of machine worship, but the truth is that the work they can already do is good enough to start manufacturing some grim externalities. It doesn't have to be excellent for this Efficiency Cult to begin excising the expensive mortal parts of their otherwise perfect systems. It only has to be good enough for the Regional Manager, who hates art and especially artists, whose intractable humanity has made them so difficult to replace. I mean, I think about it structurally. For my cohort, the bone-deep revulsion is on the aesthetic plane: the inevitable result is a less human world, with less beauty, less magic, and less communion.

If you were sampling a musician's work, you'd have to compensate them. But because these things sample all artists, now that the labor has been utterly obscured, now it's awesome and cool to do and you're a Luddite if you say there's something weird about it. Well, the Luddites were fucking right, everything they said was gonna happen did, and it's only because of a two-centuries long PR campaign on the part of capital that you don't know that.

Anytime you take up a tool, and consider its use, imagine it in your worst enemy's hand, with the sharpest part of it pressed against your neck.