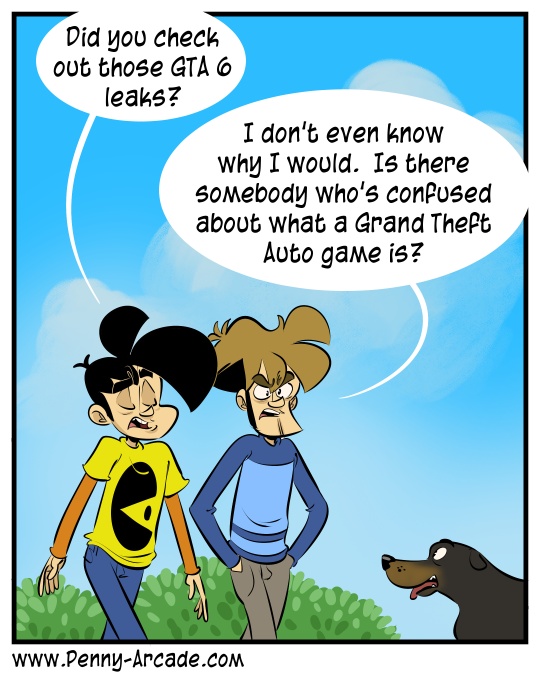 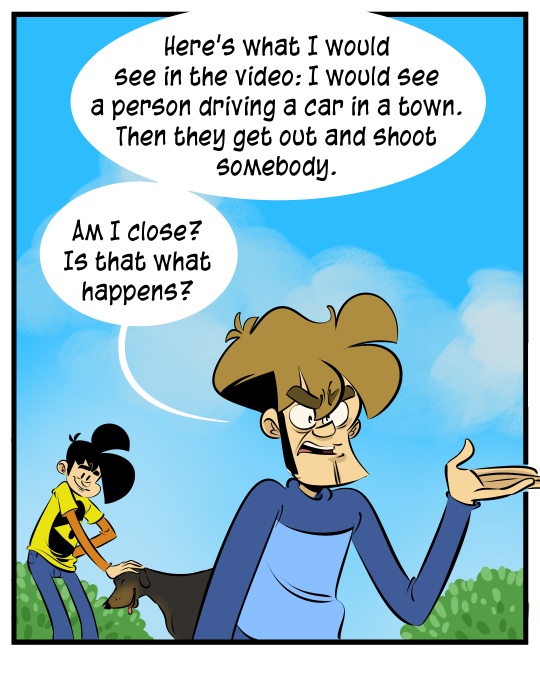 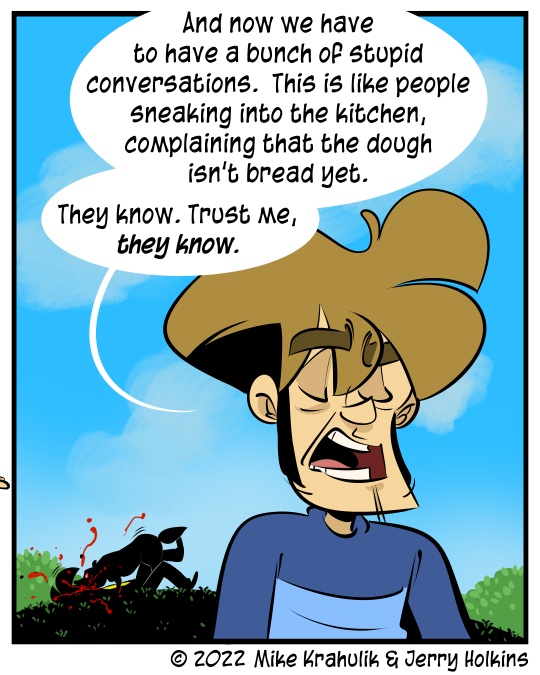 Maybe such things "hit different" when you are also a maker of things. Most of our stuff is delivered hot and fresh, as though from the back of a truck, so the idea that we could have worked on something for years and years and not have released it doesn't map fully onto the GTA leaks. I wouldn't even work on something with that long a lead time; it's completely outside my nature. I hate the things I make almost immediately after I've finished them! Frankly, I think the sentence before this one could use some fuckin' work. I would begin hating whatever I was working on a week or so in and then I'd have to work on it for four more years.

So, I feel bad for them. I had seen a headline on some algo-driven minotaur maze shithole about how the graphics had "gamers" worried, when I think most gamers know the difference between batter and cake. And if they don't, I dunno. I'd probably avoid their birthday party, at a minimum.

I happened to have been watching Twitch particularly closely the last couple weeks, and it's like that video of the sinkhole in that pond where you see a couple trees moving and then a bunch of things that had been tall and standing, just sterling and proud in their determination to exist, simply disappeared into the Earth.

I had mentioned Twitch gambling before sur le twittre, because on an earlier obsessive excursion into the platform I'd watched somebody run through more than a hundred thousand dollars on browser slots. The man who was doing it prides himself on his masculine qualities, he's very tough and speaks in a staccato fashion like a dog or a gun. He has a hard face, and when he turns his head quickly, you can hear a couple dry seeds rattling around because there's nothing else fucking in there.

A lot of things seemed to happen at once for the ol' Twitch. A streamer got addicted to gambling and scammed a bunch of viewers and even other streamers into giving them money. This is what led to Twitch banning specific forms of gambling streams next month. So then, a couple Good Guys said they were gonna give those people some of their money, but apparently one of them wasn't a very Good Guy after all. This is all happening as Twitch is altering the deal, which no doubt has some "gamers" praying they don't alter it further. One of the reasons they say this is happening is because Twitch is super expensive to operate, but run it back: if Twitch can't hit targets as the dominant platform, is this even a category? I'm serious. Streaming is a side hustle for YouTube, which makes billions upon billions elsewhere. Twitch is definitional in the space, and the reason they're always giving for systematically making the platform worse and worse is - in essence - because their business model doesn't actually work.