To help people get their Afterburners installed, we're offering (free of charge) this handy addendum to the manual. I'm not saying you aren't capable of it, I mean, shit, we did it. But to get everything absolutely perfect would require an act of God in my opinion, and as I've gone into already, I'm agnostic. 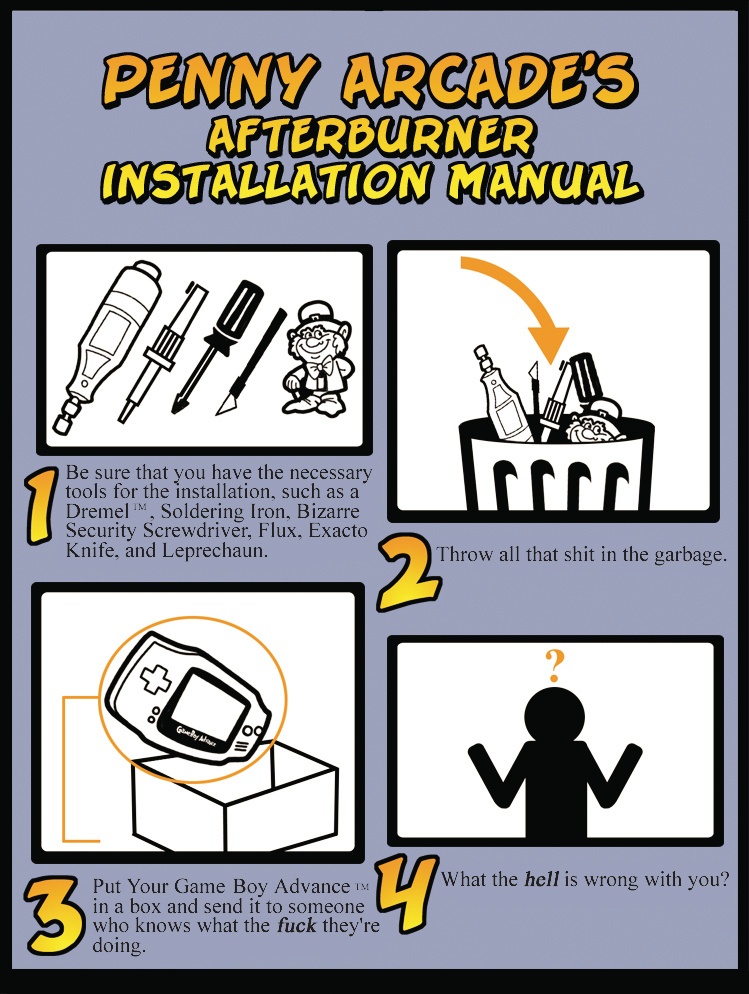 For one thing, I doubt that most people have access to the corral of tools that ensure success - and their acquisition adds to the virtual cost of the unit. I mean, I doubt I'm going to be Dremeling again anytime soon, and that thing was like forty bucks. The manual suggests using one of those, and they are quite right to - they devour plastic, and for the portion of the instructions where you need to cut a chunk out of your case, it is almost the perfect tool. Also, the tiny "security screws" on he back of the GBA have a non-Euclidian three prongs - you can get around this by taking your newly acquired Dremel to a set of standard jeweler's screwdrivers, but I don't know how many people are going to want to fashion new technology in order to install it. I know that geeks exist along a gradient. You've got people on one end who don't mind recompiling their kernel or whatever in order to use their computer. On the other end, you have people might love this stuff just as much, but don't feel like it's their job to melt solder on the inside of their GBA. I think the product is compelling enough to be of interest to most users, more users than I think should attempt an installation - I'm willing to bet that by and large these are the sort of people who like to leave the screws in.

There is an IGN Insider article on the Afterburner, but as near as I can tell, this isn't a review of the Afterburner so much as it is a review of a particularly frustrating installation. He had a terrible time of it, botching the application of the crucial AR film you must stick directly to the LCD. Triton Labs will be selling more of this stuff directly from their site, so you can resolve a bad installation - but the kit only comes with one piece of the stuff. I'm lucky to have Gabe here to handle shit like that, as his hand is so steady people seem convinced that he does PA with a vector graphics application and not with his actual wrist.

You might be wondering how it actually performs, without further editorializing on the procedures involved. I think it looks pretty God damned good. I can't make it dark in the living room, so the pic on my cam is about as good as I've got to show you. The light is, in fact, completely balanced over the whole of the screen, the only thing that comes close is the Flood Light, which I've already spilled enough ink over. Some people call the quality of the color "washed out," but I've found that this really depends on the game. Some games look completely unbelievable with it, and others look a little puny. For example, the visuals in Advance Wars and Golden Sun are truly marvelous, and I must say that I was not aware they looked as good as they do. Castlevania still looks a little anemic in the vibrancy department, but is quite playable. I don't really have an explanation for the disparity, except to say that visibility (even with external lights) varies from game to game anyway. Certain titles simply deploy palettes that are more visible with the standard system, and it's possible that sticking with a lighter palette (as Nintendo has suggested developers do) lends itself to this look. This is something that might be resolved with the addition of the brightness dial, an optional step we did not choose to take. By and large, my collection looks fantastic.

I know that Lik-sang sells GameBoys with the unit pre-installed, I've also heard that Game Console Repair will be performing the service for a twenty-five dollar fee, above and beyond the cost of the Afterburner itself. PortableMonopoly.net offers a similar service. If you already have a Dremel, soldering gun, exacto knife, unicorn, whatever, by all means - geek out. Portions of the experience were harrowing - there are no less than five surfaces which must remain surgically clean, you get one chance to do some phases, and we did it on my GBA - but I'm very happy with the result. But unless doing it yourself is Economical, by which I mean "You can do it for the price of the lighting kit alone," I would take advantage of someone else's experience and deny all personal responsibility. It's not impossible, as is evidenced by the fact that my GameBoy Advance now glows in the dark. I relished poking around in my system. I would never, ever install another one. If you want to put yours in, this is me looking at you with a mixture of pity and incredulity. Be sure to hit the Triton Labs board for tips before you get underway.

So, here's my final word on it.

They screwed around with the schedule at this year's E3, moving everything a day in advance, which doesn't work so hot for our setup. What that means, essentially, is that our own updates are going to change a bit - not by much, and just for this week. Instead of the update that posts late Tuesday/early Wednesday, there'll be stuff up Wednesday, Thursday, and Friday nights. Seems like pretty good trade, all things considered. Also, the tiny Microtek Pagewiz that we started Penny Arcade with finally went to that Retail Outlet in the sky, so I obtained one of those slim Canon ones to bring down with us. Gabe's plan was just to have us upload the sketches when we got back, which seemed like a dangerous proposition. I mean, if you did something realspace three years in a row, it would become a tradition. If you do something online three years in a row, that's practically an Ancient Rite. Anyway, I'll probably drop in to the post to "prime the pump" as it were on Tuesday night, but I wouldn't expect much out of me. I find flying highly agitating, and I found it so even before I could readily imagine intersecting, like a body check on a massive scale, with a skyscraper.