If this is World of Warcraft in its beta form, then we would do well to fear the hybrid super heroin they will ultimately unleash. My propensity for "crafting," if indeed that is an accurate term to describe clicking a button until some imaginary quantity is created, is well known - and this was before I was scanning the countryside in the style of Aragorn, selecting roots of a curative nature and making potions of various kinds while Gabriel was savagely mistreated by bears. 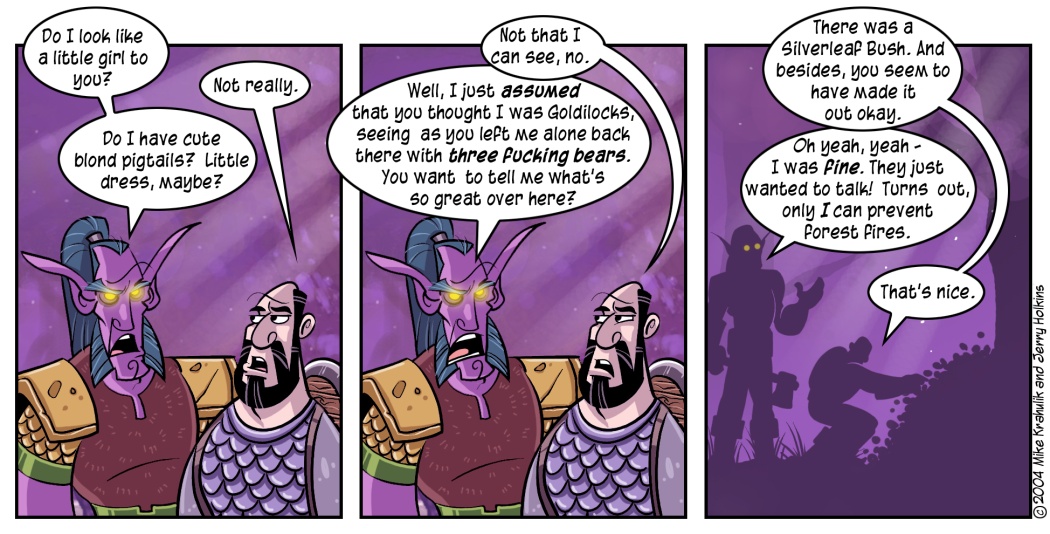 Poring through celestial charts to determine the portents, muttering darkly over an altar slick with blood you might be tempted to think that it is World of Warcraft's purpose on this Earth to sanctify the MMOG genre, scouring it of the abusive, evil games which currently occupy the space. The irony is that it is merely excellent, which may not alight on the high perch people have imagined for it.

The word which constantly comes to my mind when considering the game is "humane." I have quite a lot of patience for games of this type, I don't mind going to a town and asking every medieval jackhole I see where I can find the cathedral. Gabe's not going to do that. That sort of thing isn't fun for most people. Gabe's going to cancel his account when he finds out that it takes twice the experience to get from this level to this level, or the materials you worked so hard to get are destroyed because of some arbitrary roll. For you and me, hey, maybe we don't mind that kind of thing. Maybe we hate ourselves already and see the genre as a way to work off spiritual debt, like a karmic gym. Regular people, a definition I don't usually apply to Gabe, but whatever - regular people know that things like that are bullshit. So why do we consent to them? What's more, why do developers assail us with these notions? Part of it is, I think, a twisted sense of tradition - the games before did it. Part of it is that is keeps a person - a certain kind of person, at least - onboard for more suffering. Maybe there's some kind of grind in the upper levels I haven't reached yet. Maybe at level 30, you start losing experience when you die or some other antique convention of the genre. I doubt it.

In terms of raw polygonal power, the technology behind World of Warcraft does nothing to eradicate the state of the art - where the game excels is in the way it marshals those polygons toward realizing the world. I was never one of the lucky Alpha players, so the only time I see Orcish architecture is from the back of a gryphon - they're testing the Alliance races at this point, think Gnomes, Dwarves, Night Elves and Humans. Looking up from the road at the Dwarven city of Ironforge, you will be hard pressed to find fault in the view. You can also see the tasteful (but hardly overpowering) details that light brings out of the environments, bringing the the stone surfaces in the foothills there into relief. That area, called Dun Morogh, has details in the surface of the snow and stone roads that also take on this accent. Now I'm getting wistful. It is my opinion that they are specifically trying to do more with less, and with an art department is this strong they can make it work. Buildings have an exaggerated, broadly drawn shape that evokes the sense of the whole building. Also, with some chugging in huge towns or gryphon rides, you can play the game on a one gigahertz machine with a GeForce 2. I mean really play it, not watch a slideshow entitled My Visit To Azeroth.

I'm going to keep writing about this some more, this is just what is here now. I played the game about thirty straight hours and I'm still decompressing the experience.