The dialogue about World of Warcraft's new "Rest State" system is completely fascinating to me. It's one feature out of a ton in the new beta they just dropped - in case you are not an absolute news weirdo and don't know what I'm talking about, I'll give you the rundown. 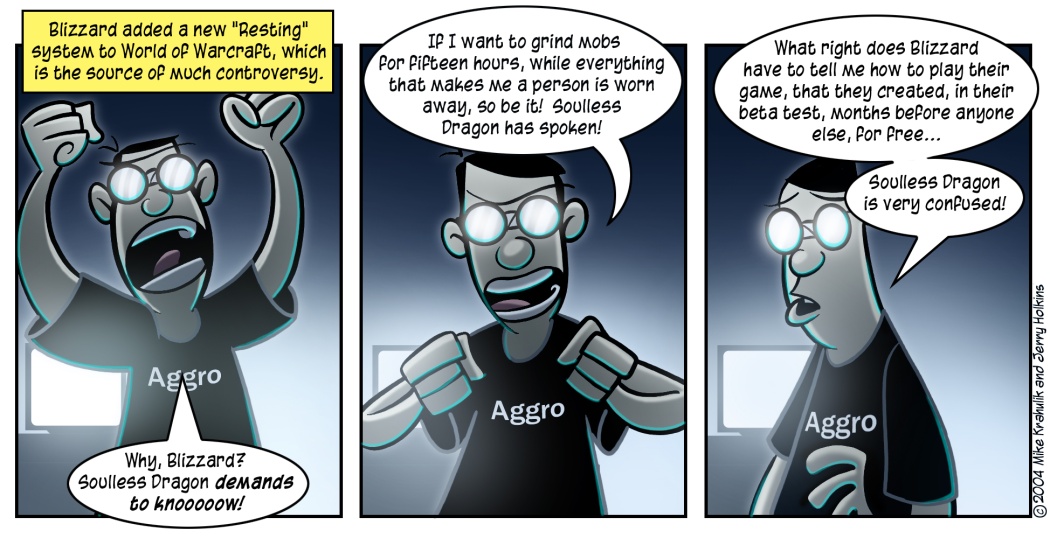 Maybe it still has it, I haven't played it in years - but Ultima Online had a feature called "Power Hour" that made the first hour of play each day more productive, which made the rest of the time feel less so. Now, extend that concept, defining why it's more productive and even adding a penalty phase where playing too long actually negates experience earned from kills. In a nutshell, that's World of Warcraft's new Rest System and many, many people hate it.

At least, it seems as though many do. The people opposed to it are extremely vocal, as the official forum makes clear. That is always true, regardless of the game, regardless of the issue, and it must be noted that volume does not indicate the veracity of the claim. The trouble is that the Rest System and its current implementation cuts crosswise a number of issues important to different gaming sects.

It is fair, I think, to characterize myself as "hardcore" in terms of hours playing games and consumption of news relevant to the scene. But there is a different level, a secret universe of people whose cores are not only hard, they're used to calibrate hardness in other materials. The true MMORPG devotee internalizes these games to a startling degree, far more than I might, and I've even written an elaborate backstory that takes into account gameworld landmarks. They don't play the game so much as they manipulate and endure it. I came into contact with some of these people when I made fun of the Everquest shots - it is literally a lifestyle choice, and the depths they plumb in these virtual worlds are deep indeed. I think of them as humanity's forward scouts into that untracked digital realm.

This rest thing gets on their nerves for a number of reasons, which are enunciated in threads with titles like "OMFG REST STATE = LAME," which formulates the position as an inescapable equation. They feel that Blizzard is trying to control the way that they play the game, which is clearly the case. Yes. The decision makes clear that "power gaming" is an unhealthy aberration, the result of a design flaw and should be curbed. I don't see any other way to interpret it. When they say that the system "helps players avoid level-grinding," it's a nice way of saying "Please don't play our game until you die in a Korean cafe. Every eight hours, please verify that a part of you has not been chewed off by a neglected pet."

The people this concept bothers also don't like what they see as "handouts" to more casual players. The sensation that others are getting things they don't deserve while you yourself toil for decreasing rewards is something we can all understand without much explanation. There's also the sense, difficult to avoid, that if you start out with a bonus to experience, even the normal amount now amounts to a penalty. They want the extra time and devotion they're prepared to invest to represent something, and they feel like it's their right to do so if they're paying for the account. Hard to argue with that.

I think Blizzard has miscalculated the effect this would have on the stalwart core of any Massive game. I also think this is simply the first iteration of a mechanism that will see significant alterations before retail.

With the way I've been playing lately, catch as catch can, maybe put in a whole Saturday if I can swing it, I don't know that I'd ever really run up against this "experience penalty." In fact, I'm likely to be well served by this system. And remember, this doesn't affect quest experience, where a fair chunk of each level is gained. It also doesn't affect PvP, where we can presume many high level players will spend their time. What it does is remove the incentive to indulge in the mechanical, repetitive aspects of the game. My current plan is to have multiple characters, one Horde, one Alliance, and when one guy gets tired he goes to the stable and the other guy comes out fresh. I have a sneaking suspicion the rest system is designed to encourage that behavior.

I added the paragraph you are reading now after having played the game for a few hours in the evening. Over the course of four/four and a half hours, I gained three levels and never left the "Well Rested" state. When I was done adventuring, I used one of the new Hearthstones they introduced in this build - the equivalent of Diablo's "Town Portals" - and logged out at an Inn, where I'll retrieve my character tomorrow fully rested. Either this system isn't working the way it's supposed to, or people are making a huge deal out of nothing.

it's keeping me awake