For his birthday a couple years ago, I bit the bullet and bought Gabe a Tivo. I did this because, to a very large extent, the parameters of his life were defined by which shows came on at what times. Certainly being able to manage your stable of programs is a positive, humane development - but the main reason I have it is so I can skip commercials. Just before I obtained one of the devices myself, I could be expected to scream with all my vigor at the antics which lurk between show segments. It was essentially a Two Minutes Hate, except where the traitor Goldstein might have been projected I instead railed against Arby's vile, creatively inert Oven Mitt. 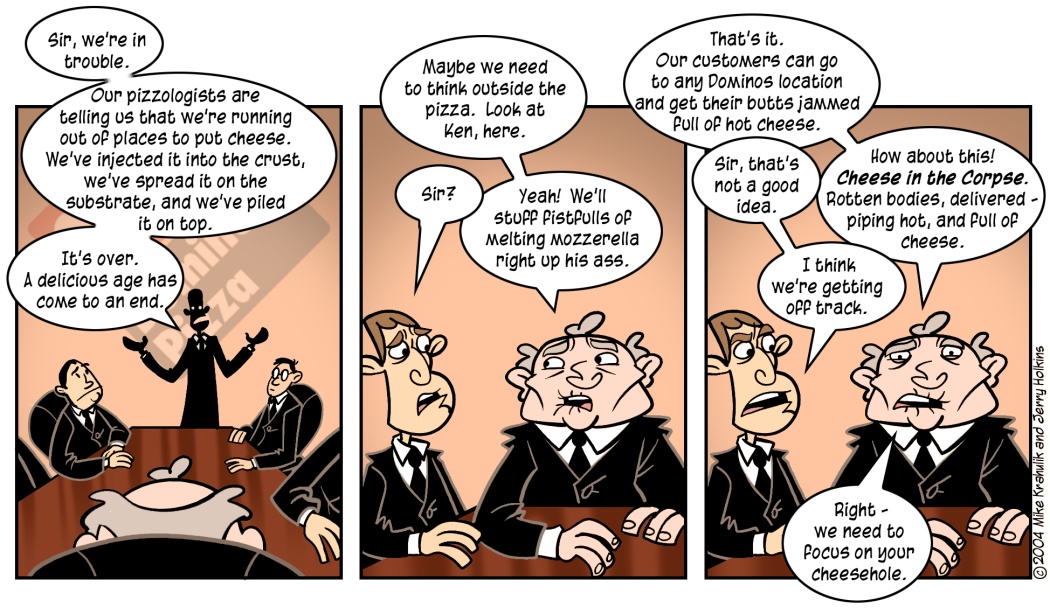 I don't understand why this is exactly, but he is only interested in the time shifting functionality of the machine: he will let it record shows, and then watch them later, with the commercials intact! To what end, sir! Imagine a futuristic shower stall that would store your rinsed off filth for immediate reapplication, and you have come very near the point. This isn't actually the problem, by the way. If he wants exposed to Oven Mitts and and other toxic stimuli, fucking have at it.

Here's the issue: he'll come in to me and ask me if I've seen this or that commercial! As though there were some virtue in it! As though he were collecting and arranging small treasures. As though I had not arranged my life in such a way as to be impervious to their urgent message! He was telling me about some ridiculous new pizza yesterday and I just Goddamn lost it. Every minute flap of the pizza industry's delicate wing I am forced to internalize, all because they have gotten their twisted seed in my compatriot. On that note, it does seem to me that they are running out of places to put cheese. For my part, I hope they fucking die in cheese. I will not have my satisfaction until they are boiled away, only fingernails floating on a sea of bubbling white.

If you've been into EB lately, and call it a hunch but I'd imagine this is the case, you've seen that they have modified the Gamecube kiosk to include a set of bongos where the second controller might once have been. God love 'em, but I really think they're asking a lot of the young men that come into an EB if they think they're going to go over there and touch that thing in plain sight.

That's really the trouble. Donkey Konga is like an experiment I perform on people I know, from the hardcore on down, as I'm of the opinion that the game taps into some pretty fundamental themes. I have all the shit and four bongos in a box I wheel from place to place like a travelling show. As long as you can get someone to actually play it, as opposed to just stand there framed in the doorway with their arms folded, you're in for a pretty good time. The concept it is based on goes something like this: "It Is Fun To Clap With Your Friends."

Now, I know that's ridiculous. I know it. But I swear to you on the plot of unturned earth that will one day be my mother's grave that it is true and it is good. It is true and good and incontrovertible that when you clap with your friends you feel joy. As a raw game, it is highly amusing and can pack an almost demonic challenge you wouldn't expect from the earlier difficulty levels. Initially, you might find yourself looking around as you are playing the bongos on the song Bingo. You are looking around because you are afraid that a girl might see you. I need you to be strong.

They had them in Costco when I was there last week, for five bucks cheaper than EB - hopefully they'll carry the bongos solo for cheaper as well. If you're already enthusiastic about rhythm games, the purchase is a no brainer - but I can't stress enough the tribal unity produced by as little as two and as many as four drums.

i'd rather see you dead