Gauntlet: Seven Sorrows looks a little better each time I see it, coming all the way from my initial exposure which never really found purchase. I'll take a look at E3 and see if fully seven sorrows are actually on display - I'm not in a position to know, but I understand that this level of despair is considered somewhat implausible. 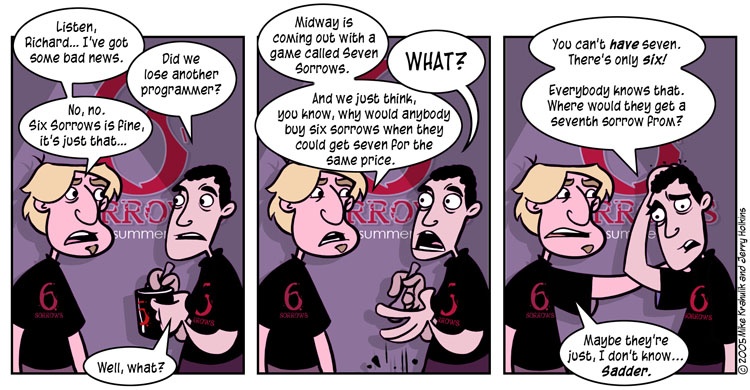 I mentioned that Golfing MMO Shot-Online the other day - along with a handful of other Korean delights - and I've probably played ninety holes of it since then. Many, many things about the experience are super raw. The Koringlish "Pro-Tips" are a mind-bending, indecipherable mash - "If ball is above foot, left curvings" is a piece of treasured wisdom I try to apply in my everyday life. The music sounds like a pile of burning instruments. Outside of a few specific instances, the sound effects were clearly drawn from one of those "Three Thousand Royalty Free Soundz!!!" compilations - there is an eagle rendered at such a low resolution that you could cut your ear on the waveform.

And I'm in there every night until one o'clock.

The golfing is actually pretty good, and certainly the accessories I have purchased with my tournament winnings are sporting indeed. But we spend our time there because Massive games in general are the bastion of co-op. My crew be geographically diverse - these days, a game with only Split Screen might not get bought to begin with. That's why it was so heartening to hear that the two games I've seen the most of for the Xbox 360 - Gears of War and Ghost Recon 3 - will both feature cooperative play. If I could put something in the suggestion box, let me do so: make collaborative gaming experiences the hallmark of this generation. Just as "mouse support" was welcomed, then expected, and now fundamental, ubiquitous, let uniting against imaginary foes in unlikely genres be the honest toil for this new hardware's supposedly limitless power.

I mentioned in my last post that J Allard looks like a pirate, which is incontrovertible. You only need to look at a picture of the man to see that he spends a lot of time swinging on rigging and generally being dashing. What you might not know is that Ed Fries, who used to run the games unit over at MS, also had a very sort of "have at thee," kinda "gesturing at the plank with a cutlass" thing going on as well. You can't really see it in this picture, but we met him a few years ago at some Microsoft thing. His blond hair softly feathered to each side and a Victorian shirt of flowing silk stated in a way beyond debate that this was a man whose mind was constantly dominated by thoughts of his doubloons - and vice versa. I'm not trying to place a stigma on those who engage in piratical acts - in fact, just the opposite. Piracy is wicked awesome. There's just something mysterious about the management structure over there where once you get past a certain point you have to start hoisting the Jolly fucking Roger.

The overwhelming wake of E3 news has already begun, I've been keeping an eye on 1up but the distribution of news from the event has gotten very sophisticated the last few years - so much so that even when I'm in attendance I can still spend hours in the hotel synchronizing with it. I'll be back here Wednesday with something you (hopefully) haven't already read a hundred times.

dreamers always chase but never get it