I listened to Gabriel with increasing disbelief. I'd heard, as I think everyone did, that the original - by which I mean the original original - Star Wars trilogy was coming to DVD. What I had not heard, and what Gabriel intimated to me with his eyes wide was that these would not be from the scrubbed, manicured footage they used to make the re-imaginings, they would, in fact, be anamorphic rips from old laserdiscs. What's more, they can't even be purchased separately. They can only be purchased with the newer versions, together, for ninety dollars! Ha! 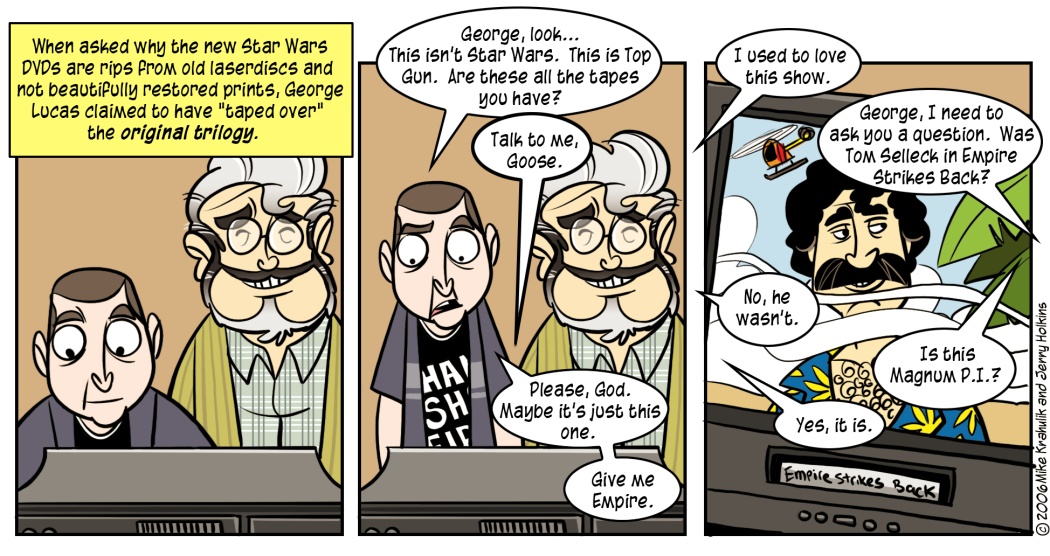 Clearly, the original trilogy can't be put in a position where it can outsell the new one - that's just not going to happen, so those two things must be in a statistically coherent package. But as to why the original movies can't even be seen in their original format, it's actually been claimed that George Lucas (in a manner of speaking) "taped over" the classic trilogy. That terminology was a little too good to pass up. There are good shepherds of that beloved context, but they toil in the long shadow of a dark obelisk.

Half-Life 2: Episode One could very well be called Half-Life 2: Epilogue, and perhaps should be, and I'm not trying to be "clever." It's engineered to a very high level of quality, assisted no doubt by the fact that - though there are many subtle improvements - it can be considered a bumping "Extended House Party Remix" of HL2. To get the most out of Episode One, you really need to avail yourself of the commentary track - it adds a not insignificant amount of content to the experience, and if you're interested in how a group of people can take months of raw time and beat it into four meticulous hours of play, don't be without it.

There is no buggy or swamp boat extravaganza to soak up excess time, so the first playthrough is extremely varied - but it's very familiar, so a list of novelties is hard to extract. It's all over the place emotionally, and for the experience they've delivered to be truly satisfying it helps to be open to that. If I didn't find Dog or Alyx resonant, the introduction wouldn't have been the Goddamn triumph that it was. What's new here is a more robust "emotional score," something that is difficult to put after a bullet point, but I can tell you with confidence that it's the main new feature.

Both of Steam's new episodic games are "pilots," in a sense - the lead designer for Sin Episodes even describes their proposed trilogy as a "season." I feel like the raw length of play on both episodes is fine for the price, but the way these things begin and end needs to be considered with greater care. That's just my impression, of course. I don't know that we have experience really on how to consume episodic content, with a suite of expectations created over two decades based on substantially longer playtime. It's true that they cost less, but when you're actually playing it's rare that cost is a primary concern as you traverse a game moment by moment - we simply have demands of the medium we want games to conform to.

Sin could have started a lot stronger than it did, and Episode One's fade to white felt like it came at the wrong time. If we consider the teaser for Episode Two the actual ending, all is forgiven. And though the execution of Sin's intro felt "off," it does introduce a classic melodramatic plot device that (in keeping with their pulp delivery) could pay out if nurtured properly. Both experiments succeeded, but I feel compelled to produce feedback because, uniquely, it actually matters to these games. Imagine if after the first thirty five minutes, the director stopped the film and said, "Okay, do we like this guy? Is this exciting?"

That's the promise this idea represents. I am turning the knob to "optimism," and there it shall remain.

the way of the gun